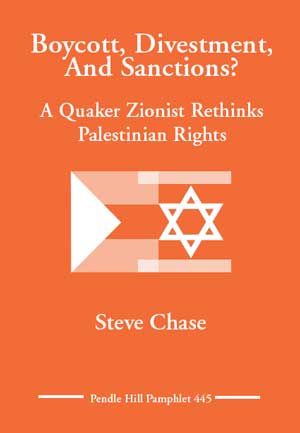 By Reviewed by Pamela Haines on October 1, 2017 Which side are you on? In the Israel–Palestine struggle, this is often the first, main, and only question. A fierce battle for loyalties is being waged and emotions run high. For those who would stand with the oppressed, this choice of sides can be a particularly painful one, since both Israeli Jews and Palestinians have real and tragic experience of oppression.

Steve Chase does us all a service as he traces his journey through this tangled web, with compassion for everyone who is trying to find their way, himself included. He started out with a warm and sympathetic understanding of the oppression of the Jews and the hope of Israel. It was with difficulty, and much reading of history, that he found his way to a similar understanding of the oppression of Palestinians by the state of Israel.

In the process, his understanding of Zionism became much more nuanced. His first love, the spiritual Zionism of Martin Buber and Judah Magnes, remains intact. The vision of a large and vital Jewish community in the Holy Land embodying the prophetic Jewish values of peace and social justice, and helping to create an independent, multiethnic, democratic socialist state in Palestine, is a compelling one. But he had to come face to face with the hard reality of what he calls Territorial Zionism, an active and ongoing intention to take land and rights away from Palestinians for the benefit of the state of Israel.

The journey finally arrives at the Boycott, Divestment and Sanctions (BDS) Movement, a recent nonviolent Palestinian initiative which has become a touchstone for controversy in the United States and Europe. Pro‐Palestinian groups have seized upon it as a moral imperative and a tangible framework for solidarity action, while pro‐Israeli forces find the implied link of the Jewish homeland to the atrocities of apartheid South Africa deeply offensive. Chase offers a framework for thinking about the BDS movement that includes historical insight, social context, and commentary on the scope and goals of the movement that should be helpful to anyone seeking to better understand it.

A pamphlet of this length, of course, has its limitations. While there is clear acknowledgement of the U.S. government’s agenda in supporting Israel as a client state so they can act as our agents in the Middle East, no detail is offered. Unmentioned is the continued role of anti‐Semitism in our culture, and the ease with which a principled focus on the rights of Palestinians can slip into collusion with the dark forces of anti‐Semitism that have been raising their ugly head in recent years and are always ready to scapegoat the Jews.

But what is offered is of great value. If you feel compelled to back the Israeli state as an essential protector of the Jewish people, read this pamphlet, from someone who knows and empathizes with your perspective, to probe further into the complex story of Zionism. If you have firmly thrown your lot in with the Palestinians, read to better understand the history and nuance of Zionism, and to keep from the tendency to demonize Jews. If you are deeply perplexed about the whole conflict, take this opportunity to travel with a clear‐headed and compassionate Quaker who has committed to a journey through this challenging territory toward ever‐greater integrity and truth.

The Book of Joy: Lasting Happiness in a Changing World
Transfigurations—Transgressing Gender in the Bible

One thought on “Boycott, Divestment, and Sanctions? A Quaker Zionist Rethinks Palestinian Rights”