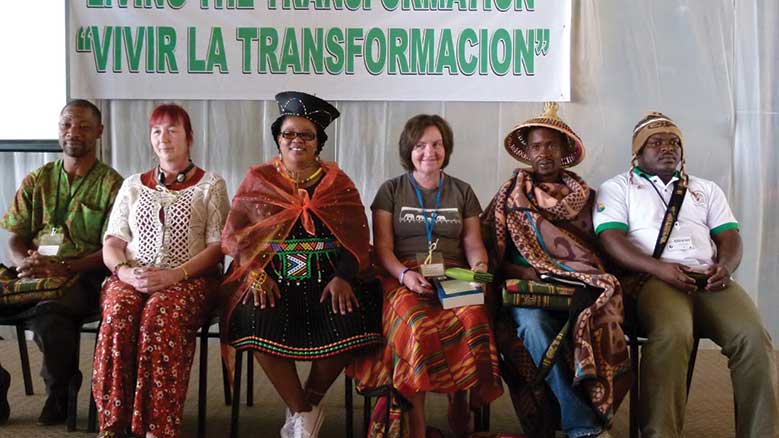 All photos © Vanessa Julye, from the World Plenary Meeting in Pisac, Peru, January 2016.

I am a Quaker. I am part of a worldwide Quaker community, and I inhabit that knowledge daily. It helps me live the way I want to. The knowledge and reality of that community membership informs my life and gives me the strength I need to live faithfully, to speak truth to power, to witness in the world.

Having grown up in a Quaker family, the daughter of a pastor in Indiana and Iowa (Friends United Meeting), I heard the language of prayers and hymns and thought‐provoking sermons. And in the silent worship, I learned to listen deeply for God’s comfort and promptings and humor. I grew up with what I feel is the best combination of Quaker practices.

Moving to Philadelphia as an adult, I felt comfortable in the unprogrammed tradition, thankfully, as that was the only Quaker option. Working for Friends General Conference, I admitted to a new acquaintance that I had grown up as a Quaker pastor’s daughter, and he said in all seriousness, “Then you are not really a Quaker.” How could I describe how much this hurt me? How could he say I was not a Quaker when I grew up as a Quaker, and was committed to this way of life?

This is a problem among Friends—claiming what we each know to be “the Quaker way,” when Quakerism takes on about as many forms as there are meetings and churches. My own family is a case in point.

My family of origin mirrors the complexity of the family of Friends. My family immigrated to North America from England in the late seventeenth century to escape religious persecution. Since then my family has spread all over the United States., and my father’s 6 siblings and the resulting 32 cousins reflect different strands of American Quakerism. I have cousins who are active with evangelical Friends, programmed Friends, and unprogrammed Friends.

Family, at its best, gives us a sense of belonging, an appreciation that we are loved. It is perhaps our best chance at being understood. Whatever we long for in our lives, when we give it to others, it will come back to us. Whatever we lack and want, when we do that for others, it is reflected back. This spiritual principle can seem impossible when we feel depleted, but it works miraculously on a deeply spiritual level. If we want to be understood, we need to listen deeper in order to understand. If we want to be accepted for who we are, we need to suspend judgement. If we want more love in our lives, we need to love from a selfless place. If we want to be family, we need to be accepting and inclusive of our whole family, in spite of how they may differ from us. And in reality, within our Quaker family, on one level there are many differences, but on the most important level we are all children of God, all equal in God’s sight. We belong to each other.

Sitting with friends over a meal at the World Conference in Kenya (2012) and again at the World Plenary Meeting in Pisac, Peru (2016), I thought, “This is one huge family reunion.” There were people jumping up to give hugs of greeting; there were introductions and hand shaking; and the room was abuzz with laughter and conversation. Leaning in, listening intently, and heads nodding to indicate understanding: it was all part of the lively fellowship. It was a chance to breathe together, to get acquainted and reacquainted, and to meet that elusive long‐lost uncle. And in spite of an occasional oddity that might have threatened to put me off in another context, these people were and are all part of this grand Quaker family. We all belong to each other.

As general secretary of Friends World Committee for Consultation (FWCC), I have the privilege of traveling among Friends, sharing greetings across different parts of the world, different cultures, and different Quaker traditions. There is a longing to belong and to claim the Quaker family as one’s own.

What would George Fox make of modern Quakerism? I venture to say he would not recognize the Quakerism of 1652 in any one church or meeting, but would see familiar elements in each of the different traditions around the world. In combination, we might reflect the fullness of those early days, and no one tradition any longer reflects early Quakerism.

There is fear among some unprogrammed Friends that they will be swallowed up by a louder, expressive tradition which gives too little attention to expectant waiting. There is a fear among some programmed and evangelical Friends that silent Friends don’t take the Bible seriously enough, or literally enough. And of course there is every combination in between such as the Evangelical unprogrammed Friends in Northern Ireland, and the sprinkling of Conservative meetings in other parts of the world.

Through my travels among Friends, I see that culture and history have a huge impact on the evolution of religious life. Quakers worshiping in a more evangelical culture, such as in Kenya or Guatemala, become more vocal even though they are seen as the quiet ones within their context. Religious life in more secularized Europe tends to move toward caution in using God language. It is most difficult to see these cultural influences within our own cultures.

FWCC, in the world office and in the four section offices, is engaged in doing profound diversity work. Our ability—or inability—as Friends to work toward true acceptance of our multiplicity is a statement about how we want the world to change. If we imagine a world without war, we must first accept the entirety of the Quaker family. If we want the world to be more loving, it begins here in our own family.

At the World Plenary Meeting in Pisac, Peru, this past January, I felt a distinct sense of love among us, freer from tensions of the past. Was this because a third of us were under age 35 and millennials have a natural ability to assume diversity? Was this because we met in a lovely setting in the Sacred Valley where God felt more accessible? Or was this because as Friends we are getting better at accepting our differences and are increasingly interested in celebrating the things that unite us? Can it be that our unity feels more vibrant and valuable than the distances we have created in the past? One can hope.

FWCC’s tagline speaks to this hope: “connecting Friends, crossing cultures, changing lives.” Making these connections and friendships broadens our world and our understanding and appreciation without compromising what we know and love in our own tradition. Opening ourselves to other Friends does not take away from what we know. The bigger we make our tent, the greater our love. I imagine God smiling.

As part of our Quaker testimony to equality, I am usually one of two women around the table when we meet annually. As one of the least hierarchical communions, we have less need to come to unity at the world level. And even though Quakers are relatively tiny, communions of all sizes are challenged by similar issues of diversity, homosexuality, evangelical growth in the global South, and defining the role of the Church.

I am often asked what it is that unites us. We seek that life and power that comes from the Holy Spirit. We seek a deeper communion with God, with each other, with the family of Friends around the world. There are many things we do similarly, like holding Spirit‐led meetings for business, waiting on divine leading, working for peace and justice, use of the testimonies as a guide, use of the Bible as a guide, and living our lives in ways that reflect our convictions and beliefs. We are imperfect and we are all children of God. We are all human, seeking spiritual inspiration. We let love be the first motion, illuminating our imagination for a better world.

We have known each other in the things which have felt eternal, as well as those things which truly are. We have travelled to visit each other, knowing that we will find welcome and a like mind at the end of our journey. We have known that as long as we stay within the Quaker fold, we will most likely meet again. It is companionship of the greatest depth and trust. These are friendships “for life” in every sense.

Gretchen Castle serves as general secretary of Friends World Committee for Consultation–World Office in London, which works across the four section offices around the world and represents Friends at the world level. Gretchen is a member of Doylestown (Pa.) Meeting.

One thought on “What Unites Us”