In a meeting for worship in the early 1940s a young woman, fairly new to Friends, felt the irresistible urge to speak. She got to her feet, and as she spoke, she noticed a toddler standing on the bench in front of her, both hands on the back of the bench, gazing intently and solemnly up into her face. This image remained so powerfully with the young woman that half a century later, when our paths happened to cross again, she spoke of it.

That toddler was me. Shortly after this encounter, my family moved to a new meeting. As a teenager I listened to the messages in meeting for worship and somewhat irreverently categorized them: the American Civil Liberties Union report, the Friends Committee on National Legislation update, the garden report, and so on. But there was one speaker who was different. Although I didn’t always understand his message, whenever he spoke I paid close attention. I understood that he spoke with authority.

For me these stories point to two basic, almost inexpressible Quaker foundation stones. Authority comes from God, and it is recognized by Friends. Both parts are essential: that an individual speak or act or just be under faithful obedience to Divine Will, and that the faith community recognize and acknowledge that the message or action or be-ing is divinely inspired and covered.

As a toddler and as a teenager, I knew this, not because anyone had told me that this is the Quaker theory, but because the knowledge of it was already in me. The young woman in the first story, and the man in the second, answered that of God within me. We use the verb now in a rather narrow sense of giving information in response to a question. At the time of George Fox, who used the phrase we so easily quote, there were broader implications. They also said that a key answers to the lock. They fit together; there is a relationship. So when we speak of answering that of God in someone or everyone,
it means that the Christ within me connects to the Christ within thee. There is a fit, a relationship. And one result is the inner knowing that Truth has been spoken, been acted, or been present. We recognize Authority.

Authority is an important component of any religion. For liberal Friends today it is a major issue. It helps to recall the Quaker vision of authority: it comes from God. God is the ultimate, indeed, the sole source of authority. There is also some very good help for accessing Divine authority. Traditionally, Friends have found the Bible to be of utmost importance because it points to the Source. Tradition, meaning the experience of Friends and others who have gone before us, also provides guideposts. Over the centuries Friends have found both Scripture and tradition to be in unity with the ongoing revelation of Divine love discerned by the community when it is gathered together in humble, attentive listening to the Inward Teacher.

Friends have experienced that God may delegate authority to anyone, according to God’s own purposes. Because Christ is come to teach us himself, individuals and the corporate body can and must discern what he is saying. We must discern God’s will. An important step in this process is discerning to whom authority is given in this instance, who speaks with authority (and who does not). When it is discerned who speaks or acts with authority, then the group has responsibility toward that action or speaking, and toward the individual through whom it comes. This is the part that makes some modern Friends uneasy. Some bristle and mutter, "Sez who?!" and, "Who does she think she is?" Other Friends today yearn for wise and seasoned Friends who can mentor us and help us learn how to hear and obey God. How might we understand and support speaking and acting under Divine authority so that our meetings can be rightly guided?

When someone speaks with authority in meeting it deepens the worship. It draws us toward the Center. There can be a palpable sense of God’s presence. Outside of meeting for worship the same thing happens. There can be a visceral reaction that stops one short, shifts one’s mental gears, brings a churning in the stomach. Some people react with a deep knowing rather than a physical sense. All individuals need to learn to recognize their own discernment signals.

Part of our difficulty today is that we may not be looking for authority. We may not assume that God really will speak to us through the words or actions of individuals in our midst, including, on occasion, those whose names would not have occurred to us. It is hard to notice either the presence or the absence of that which we are not expecting.

Another difficulty is that some Friends resist the idea that we might be a people gathered under the leadership of the Inward Teacher, called to witness through our actions to a united message. We have drunk deeply of the fiercely-protected individualism of our times. It is hard to accept what makes us uneasy.

Yet another difficulty, related to both of these, is the uncomfortable necessity for humble "waiting upon the Lord." The inward stance is one of patience, openness, humility, lowness, and teachability. This is our inward condition when we approach meetings for worship or business with "hearts and minds prepared." We come disarmed and expecting an authority that is beyond our own to teach and guide us. Thus prepared, we are much more likely to notice and pay attention to words and actions offered under God’s authority.

Each of us has the possibility of being anointed and called to speak with authority on occasion. So each of us must be ready to listen and to discern with great care and humility not only our own internal nudges, but the words of each other person present. It is a great adventure to discern the bits and pieces of God’s instructions as they come through the human words of our fellow Friends. It is a joy and a wonder to be part of a group that recognizes and treasures God’s authority as experienced in shafts of Light playing among us. Religious Wounding: What Can Our Meetings’ Elders Do?

How can we find ways to prevent wounded Friends from wounding other Friends? Mariellen Gilpin

The Divine Source of Vocal Ministry

It was one of those pristine June days in New England, with bright sunshine and a steady breeze to keep… 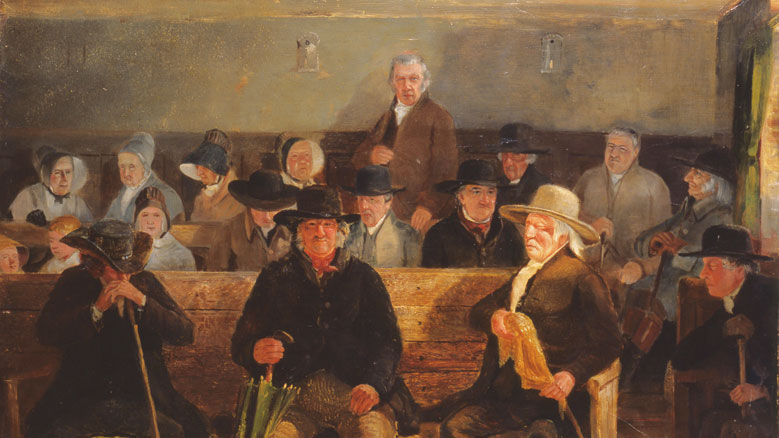 Exploring the Unwritten Rules of Meeting for Worship

How does an internalized sense of rules influence the quality of meeting for worship? Debbie Humphries