By John B. Satterthwaite

Most everyone has a private challenge. Some are difficult obstacles to overcome, like mountain climbing. Others involve winning races, building wealth, and so on. My challenge began in 1981, when the Commonwealth of Pennsylvania was celebrating its 300th anniversary. The Quaker heritage of "Penn’s Woods" was given a minimum of attention and credit. The Religious Society of Friends had made a profound difference here in the New World, both before and after the actual founding of our nation in Philadelphia, after the Revolutionary War.

After thinking about how Quaker heritage had been ignored, I discovered that nearly two-thirds of the Quaker meetinghouses under the care of Philadelphia Yearly Meeting (PYM) in colonial times have been lost! I further realized that I had never seen most of the remaining meetinghouses. I made a decision to visit each of them, and to make a painting of each one for historic documentation. This was a big challenge that would take 20 years, working part-time while I maintained a full-time job and family commitments. There were 135 sites in four states: Pennsylvania, New Jersey, Delaware, and Maryland. The only available map of their locations (printed in 1956) was hopelessly out of date. Some meetinghouses had new names, and some streets or roads had changed names or were rerouted. Finding them was like a treasure hunt. This is what I found:

Maiden Creek (1759), Berks County, Pa., had been moved 1.5 miles to high, dry ground when construction began for Lake Ontelaune. Old and New Third Haven (1684 and 1880) meetings in Easton, Md., were surrounded by much newer houses, and the entrance to that historic property appeared to be through a private yard.

In Philadelphia, the old Twelfth Street meetinghouse had been carefully dismantled to save it from the wrecking ball during a center-city "progress" construction. It was moved to the George School campus in Bucks County, Pa., and completely rebuilt. It is now in a beautifully landscaped setting and stands as a tribute to all who cared to save it. Arch Street, built in 1804 as the home of Philadelphia Yearly Meeting (before the Hicksite-Orthodox split), is huge, brick, and in the heart of Philadelphia’s Olde City section, a busy place year-round. A mile away, Friends Center, at 15th and Race Streets, is a large, modern, glass-walled complex of buildings, housing American Friends Service Committee national headquarters, Philadelphia Yearly Meeting offices, many related offices, and the Race Street meetinghouse, built in 1856 as the meeting place of the Hicksite yearly meeting. Fairhill (1889) was laid down years ago, but the meetinghouse still stands in North Philadelphia opposite the burial ground that includes the grave of Lucretia Mott. Green Street Meeting (despite its name, which stems from a building at an earlier location) and its school are on School House Lane, a block from Germantown Meeting and its school. In the Frankford section of the city, there are two meetings: Unity (the building dates from 1775 and is the former home of Frankford Meeting) at Unity and Waln Streets, and the newer Frankford Meeting (1833) at Penn and Orthodox Streets. The interior of this meeting has been remodeled into a dramatically stunning modern facility, with a small, active school next door. Chestnut Hill (1931), also in Philadelphia, sits high on a hill above Mermaid Lane, where the rear entrance is more familiar to members than the front.

Beyond the city in Abington, Penn-sylvania, is a large, substantial stone meetinghouse (1699) situated in a lovely park-like setting, close to the meeting’s large, active school. A short distance down Jenkintown Road, Little Abington (1836) stands empty, neglected, and almost forgotten after the Orthodox-Hicksite controversy ended. Merion (1695) is on the Main Line, to the west of Philadelphia, beside the country’s first toll road to the west, and next door to an historic (1704) inn that was a favorite watering hole for nearly 300 years. George Washington and his troops camped across the road on their way to Valley Forge, 80 years after Merion was built. Old Haverford (1700), not far away, is now overwhelmed by a large Catholic church, school, cemetery, and funeral home across the street. Haverford (1834) is nestled comfortably among trees on the campus of Haverford College, a busy place. Valley (1730) is a stately old white meetinghouse surrounded by black wrought iron fencing near Valley Forge Park.

Catawissa (1775) and Roaring Creek (1796) are the only remaining log cabin meetinghouses, located in Columbia County. Exeter (1759) in Berks County was the site for the wedding of Daniel Boone’s parents and the meeting attended by Abraham Lincoln’s parents. The 19th-century artist Benjamin West came from Springfield (1851) in Delaware County. Edward Hicks, the Quaker artist and sign painter, came from Newtown (1817) Meeting in Bucks County. Birmingham (1763) served as a hospital in the Revolutionary War, and its little octagonal one-room schoolhouse is still there. There are two large Falls meetinghouses in Fallsingron on the same Bucks County property (1728 and 1841).

Across the Delaware River in New Jersey, Burlington (1765) alternated with Philadelphia in hosting yearly meetings for 79 years in an earlier building. In the Burlington burial grounds there is a bronze plaque with an early civil rights message: "Be plain and fair to all, both Indians and Christians." Chief Ocka-nickon is buried there, on "white man’s property"—very unusual. Salem (1772) has the most famous oak tree in New Jersey, under which John Fenwick made a peace treaty with Indians in 1675. In the cemetery that tree still stands with a spread of more than 150 feet. Seaville (1716), Cape May County, is a tiny frame meetinghouse, with a white fenced yard containing some rare old seafaring grave markers.

Barnegat (1767) and Tuckerton (1708), in Ocean County, have survived nearly three centuries of brisk weather from the Atlantic Ocean. Newton (1828), in Camden, was built on land donated by Samuel Cooper, and eventually became knows as the "Hicksite Cabin." Medford has two large brick meetinghouses (1762 and 1842), one active and one inactive, plus a modern Quaker retirement and nursing home. Crosswicks (1692) had been known as Chesterfield Meeting until 1934. Located near Bordentown, a cannonball from the Revolutionary War remains embedded in the second-story wall. (They don’t build ’em like they used to.) Moorestown (1802) is a large, active, brick meeting in the center of that town. No other Friends meeting has what they have: the "Happy Hippo," a four-foot-tall by five-foot-long cement sculpture of a baby hippopotamus built by children inspired by their music teacher. Further, it stands next to a sidewalk that is painted in bright ribbons of colors. The graduating class of Moorestown Friends School gets to redecorate the Happy Hippo annually. I offer an ovation of approval to the teachers there for their creative, positive, and fun-loving achievements with young children. I have many more anecdotes to share from visiting 135 Quaker meeting sites, but the above is enough for now.

The visitations for me began in 1981 at the rate of one per day, taking time to observe details, the buildings, the burial grounds, and the surroundings. I made sketches, took photos, jotted notes—all with the purpose of retaining the authenticity. Rather than attempting to do the painting on location, while the light and weather changed, the bugs bit, and local kibitzers interrupted my concentration, I prepared thoroughly and then did the paintings in the quiet, controlled environment of my studio.

Taking photos was the easiest part. There was no way of knowing in advance what the weather or light would be when arriving at my destination after traveling a long distance (a total of more than 5,000 miles since 1981 for this entire project). I found overgrown trees and bushes, walls, fences, poles, even mobile homes in the way. If the building consisted of dark stones and the surrounding setting was also dark, color values would have to be changed to make a good picture. For example, a dark building could be placed in a snow scene, focusing interest on the building—the main character on its stage.

I have a preference for watercolor. I build each painting with the established "bricks" for a solid picture foundation. These include consideration of lines, shapes, sizes of the shapes, true colors, color values or intensities, textures, and the three dimensional qualities of space. An artist can control all of that in a way that a photographer cannot. The artist can put one’s own emotions into the painting with more ease than a photographer can. Color control is also easier than in a photograph that depends on mass- produced prints. Also, the quality of shadows plays an important role in defining light differences. For me, paying close attention to authenticity was worth the time. Fine Art has seven "principles" (unity, conflict, dominance, repetition, alternation, balance, and harmony) to be applied to each of the elements stated above, which means there are at least 49 things to remember during each painting. In the end, I believe that my paintings are better than photographs for the historic documentation of Quaker meetinghouses. It’s like enjoying the taste of fresh vegetables right out of your own garden, versus those bought in the supermarket.

The paintings have been exhibited both publicly and privately. In May 1998, 103 of these paintings plus a few prints were exhibited for three days at George School. Through the years some of the paintings were sold by exhibiting at fine art and juried art shows in Philadelphia’s Rittenhouse Square. One man that I met there years ago, now owns 17 of the meetinghouse paintings. Another man came upon my exhibition purely by coincidence and discovered my painting of Chichester meetinghouse—his grandfather had built it. Now the painting hangs in his home.

A total of 48 paintings have been sold, and the remainder of the framed watercolors has been donated to Merion Meeting. The sale of those will help them to defer expensive renovations to their property.

My odyssey has been filled with rich experiences; it has been an education. I am grateful for everyone who purchased one of my paintings, and I have enjoyed meeting and talking with many Friends along the way.

John B. Satterthwaite, a member of Merion (Pa.) Meeting, was graduated from George School, Ursinus College, and Philadelphia College of Art (now University of the Arts). 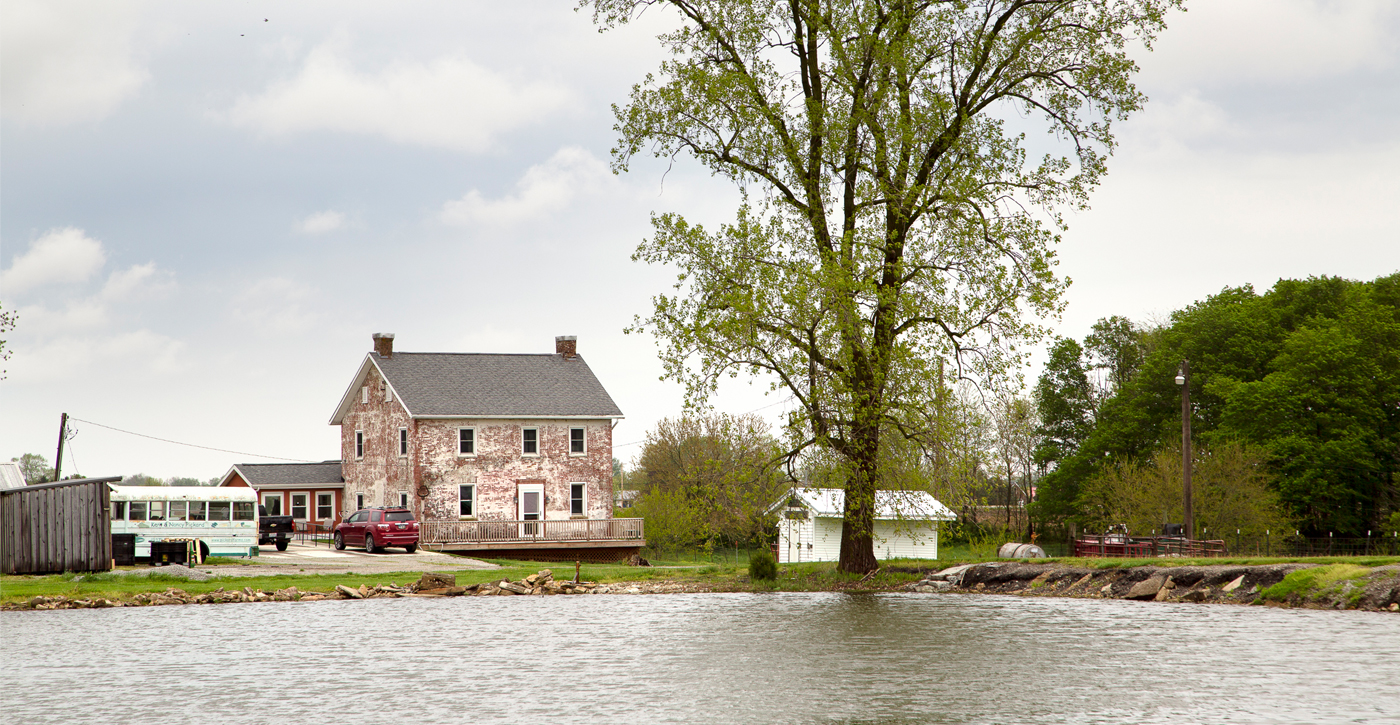 An introduction to our issue on Quaker Spaces.