Go Stand Upon the Rock 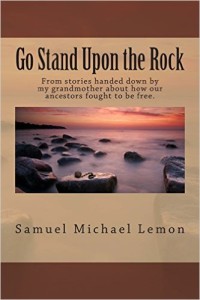 In Go Stand Upon the Rock, Samuel Michael Lemon, a Pennsylvania Quaker, shares with us the stories of his family handed down through the generations from their years of enslavement in Virginia through their various paths to freedom to their early years in Media, Pa. The author’s genealogical research is extensive, linking with others’ work and visiting the sites of plantations where his forbears were in bondage and the people who live there now.

One of the great strengths of this telling is the author’s eloquence as he seeks to convey the psychological oppression of the condition of slavery. The ancestor whose life is central to his story was relatively privileged among slaves in the American South, both because the slave master did not practice extreme cruelty on his Virginia plantation and because the ancestor was the son of the slave master (a circumstance that did not make him any less a slave nor accord him recognition as a member of the family).

The stories of enslaved women used as “breeders” of the slave population are told with sympathy, care, and the fury they deserve. Lemon’s coming to terms with the white side of his mixed race heritage due to a slave master’s relations with a slave woman (the author’s great-great-grandmother) is considered in his final chapter.

A straightforward telling of a family history, this is nevertheless a highly engaging story, probably as it was passed down, complete with conversations and descriptions of emotions and reasoning. The central character, Cornelius, was raised by the old people on the plantation because his mother died not long after his birth. These included Mama Rue, an elderly woman who knew herbs and roots for folk medicine, practiced “hoodoo,” and had been nearly killed in her youth for helping a young breeding woman avoid pregnancy; Uncle Robert, unofficial leader of the slave community on the plantation; Black Turtle, a Nottoway Native American, good friend of Uncle Robert, and frequent visitor to the slave quarters; and Big Man, who did not speak but was understood and loved. These elders, along with a Quaker storekeeper nearby, plotted Cornelius’s path to freedom from his childhood and eventually set him on the path from their Virginia plantation to Media via the Underground Railroad just as the Civil War was beginning.

The friendship between Uncle Robert and Black Turtle illustrates Native American interaction with slaves and their distrust of whites arising from broken promises. Black Turtle’s assessment of the white man in general was that they are cruel and wasteful of the “Bluefoot” (his name for people of African descent), beavers, birds, and all natural resources. Their many broken promises, notably Andrew Jackson’s promises to those Cherokee people who’d been on the white man’s side, illustrate for him their untrustworthiness.

After Cornelius’s journey north, the reader follows the journey of his wife and her son as they make their way north into a camp of the Union Army. Here we meet men who shelter the escaped slaves, and we meet black Civil War soldiers. The story of an African American soldier from western Pennsylvania in the 6th United States Colored Troop (USCT) exemplifies the experience of black soldiers in the war and speaks clearly of the pride the author takes in their courage under the terrible conditions of battle. Here, too, we have the story of a white Quaker officer in the Union Army, along with the author’s contemplation that sometimes God may require justice as a precursor to peace. Both men survived the Battle of New Market Heights. The Congressional Medal of Honor was awarded to 16 U.S. Colored Troop soldiers during the Civil War; 14 of these were for valor in the Battle of New Market Heights. The black soldier whose story we follow here was severely wounded in that battle and received care back at the camp where Cornelius’s wife was sheltering and helping to care for the wounded. He was sent from there to Rhode Island to receive treatment for his wounds and eventually returned home to western Pennsylvania. Many years later, his grandson and the granddaughter of Cornelius and Martha Jane met and married in Media, Pa.

The story of this family illuminates American history and provides insight into much that could easily be missed in the usual telling of our story. Contemplation of the American black-white relationship in the mid-nineteenth century, as described in Lemon’s writing of his family’s oral history, reveals the way in which our culture still suffers under the weight of the evil inflicted on us both by what was done here and examples of the exercise of freedom to transcend it. We have a long road to travel to reach grace and achieve justice and little time to waste. So let us run, not walk, as we seek that justice.

As John Woolman wrote in his Journal, “Oppression in the extreme appears terrible, but oppression in more refined appearances remains to be oppression. . . . [T]o labour for a perfect redemption from this spirit of oppression is the great business of the whole family of Christ Jesus in this world.”

1 thought on “Go Stand Upon the Rock”