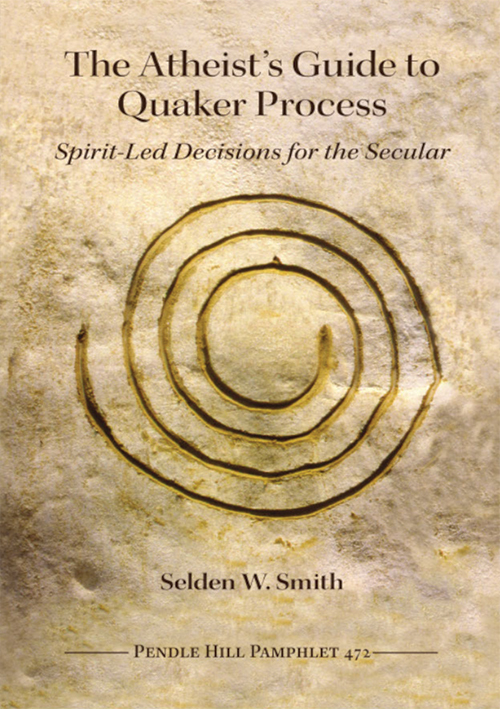 Friend Selden Smith has written a Pendle Hill pamphlet on Quaker process that both captures what it means to make Quaker corporate decisions with integrity, love, and respect for everyone in a community, and what it means to make these decisions without a shared ideology around the presence of the Divine in the same community. The Atheist’s Guide to Quaker Process is really a Quaker guide to Quaker process in that—despite what the title provocatively implies—one does not need to be an atheist to appreciate the insights it provides into how Friends ideally engage one another.

One also does not need to be a Quaker to appreciate the insights this pamphlet shares. Smith says that Quakers face challenges in continuing our business processes in institutions that increasingly include non-Quaker decision makers, as a result of:

the need to recruit members of the wider community to . . . boards—partly because there just aren’t that many Quakers, but mostly because the institution rightly seeks the wisdom and skills to be found outside Quaker circles.

Smith also points out that there is a “skyrocketing number of people who identify themselves as nonbelievers,” or “nones.”

For Quakers, Smith says, these two factors (the presence of non-adherents as decision makers in our institutions and a growing body of what he refers to as nontheists in our meetings) need not be an impediment to what is core to Quakerism: our discernment processes. Smith goes on to explain in patient detail how a Quaker meeting operates and what the roles and responsibilities of Friends and decision makers in Quaker institutions are.

While Smith says that Quakers appreciate democracy, “majorities can be wrong.” A strength of the Quaker way is that even “timid voices and awkward phrasing are given as much attention as confident eloquence.” This enables what Quakers call a “sense of the meeting,” taking into account all of the wisdom that is present in a space, which leads to better decisions than those that may have been arrived at more quickly. There is no “bargaining and compromises,” as in consensus, which, Smith points out, is not a Quaker process. What this means, Smith says, is that decisions unify a community by respecting both the integrity of the individual and of the group. Ideally, when decision makers labor with one another, they are able to continue to move through their lives together, not pushing dissenters out and not missing important wisdom.

This kind of unity does not preclude conflict, Smith says:

you can hardly advocate for a world of equality and justice without expecting a fair amount of conflict. The goal of the meeting is not to avoid it but approach it forthrightly, filled with love, and committed to unity.

While one can block a decision, one has the responsibility and obligation to labor with others around the concern. Similarly, the community should not ignore or repress the concerns of  Friends who find themselves in the awkward position of blocking a decision, but it should actively engage with a person and labor to find resolution.

Smith offers practical and detailed advice as well as ideological grounding for Quaker process. Records of proceedings (minutes) are vital to Quaker process, and can offer further insight: “If wording really proves difficult, that may be a sign that the group is actually not close to unity, in which case the issue may be postponed to the next meeting.”

Minutes should detail a decision, not record names of those involved or the process by which the decision was reached. Clerks are not chairs, Smith advises, and when speaking on an issue, speak to the issue, not to another person in the room. Quaker process is not a debate. Don’t attempt to overpower someone else, show humility for the work others have done and for the common concern you share, and work to establish trust that will allow good process to shine.

Quaker process will involve tension and hard work, Smith says, and will involve a relaxation of one’s ego. While “ego gets a bad rap,” Smith notes that in other contexts, it serves a real purpose, “but the price we pay for the ego’s relentless stewardship is a general blindness to the massive forces underlying it.” Quaker process is a way to be truly free to be your best self, a life “without regrets,” with integrity, courage, patience, trust, humor, and mindfulness.

The root of the word religion means “to bind up in a bundle,” Smith says. This connected and organized way of being together is what Quaker process is about, and when we truly embrace this, we can be “friends” even more so than “Friends.”

Windy Cooler is a Quaker practical theologian and cultural worker serving in public ministry under the care of Sandy Spring (Md.) Meeting in Baltimore Yearly Meeting. Along with her husband, Erik Hanson, she is also the coeditor of the news section of Friends Journal.

1 thought on “The Atheist’s Guide to Quaker Process: Spirit-Led Decisions for the Secular”