From a Quaker View of Sex 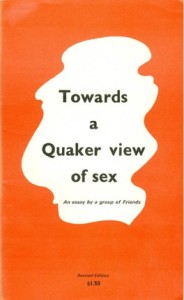 Quick! Name the most influential document published by British Quakers in the twentieth century. It’s probably a 1963 pamphlet entitled Towards a Quaker View of Sex (VOS for short). A year after its publication, LIFE magazine included it in its groundbreaking exposé on gay (male) America:

That same year, a landmark meeting between Methodist ministers and gay activists organized as the Council on Religion and the Homosexual and requested that the National Council of Churches “make a statement along the lines of that which was made by the Quakers in England.”

Recall that in 1964, the mere mention of the term “homosexual” could cause all conversation to stop in a shock wave of embarrassment and dread. The rationalist, clinical tone of VOS offered a way to calm the prevailing climate of sex panic. Even without exploring its historical impact further, we can already see VOS as a twentieth-century example of what Alan Tully called “civil Quakerism”: the propagation of Friends testimonies on justice into secular culture.

Written from the viewpoints of the sexologist/social worker, the attorney/sociologist, and the theologian/person of faith, VOS appears to have been intended to serve as a compact, but full-service, handbook on “homosexuality.” It consists of a substantive introduction, a presentation on “normal” versus “homosexual” development, an appeal for “a new morality,” a pragmatic guide for counselors, several heavy-duty appendices, and a quirky glossary. It is a queer duck among the annals of Quaker testimonies: part self-help guide, part high-school science project, and part liberal manifesto. It was unabashedly written by committee, and reads like it.

I am struck by the historical complementarity between VOS and the fiery spiritual testimonies to be found in the works of Edward Carpenter in England and his American mentor, Walt Whitman. These authors functioned as founder spirits brooding over the creation of the gay rights movement. The grand clarion calls of simplicity, peace, integrity, community, and equality articulated in Leaves of Grass provided encouragement for gay men, and some lesbians, in an era of almost unimaginable oppression. Jack Nichols, a 1960s gay rights activist and key participant in the Council on Religion and the Homosexual, later wrote:

Though Edward Carpenter had beat me to it, I was the first gay liberationist in my generation to herald Whitman as the indispensable spiritual font needed by America’s gay liberation movement. Today I regard my having done this as something on a par with or perhaps surpassing all other pioneering acts I’ve initiated.

Although completely unacknowledged by VOS, Whitman and Carpenter offered persecuted gays a manifesto of affirmation bombastic enough to shine a ray of hope into their “dark confinement.” VOS’s combination of compassionate advocacy with rationalistic sexology spoke far better to the condition of sympathetic but nervous straight allies, offering gentler and more pragmatic defensive strategies in an ancient culture war. Neither approach was strictly better; rather, both were necessary.

VOS came out attired in button-down, grey-flannel language, but openly addressed the great scandal of love between men and love between women. The front cover of VOS was stamped with an abstract puddle shape that paid homage to the hipster abstractions of that era’s modern-art craze. Stylistically, perhaps its most ambitious passage is a pretentious quotation on love as existential risk, from that darling of 1960s pan-Protestant theology, Paul Johannes Tillich.

Despite its shortcomings, an open-minded reader may come to appreciate the wisdom and clear-heartedness in VOS. Quakerism, claimed VOS, cultivates “an attitude to authority that enables it always to say, in the words of John Robinson’s farewell to pilgrims setting off for the New World, ‘The Lord has yet more light and truth to show forth’”.  The fundamental premise of VOS states:

Insofar as we love the good and know the mind of God we do not need rules and moral codes to guide our conduct. This offers, however, a freedom of action and judgment that we might grasp at too easily, assuming that we know our own minds and the mind of God. In fact it demands a disciplined search.

This is a perfect expression of what Friends believe, and VOS is a disciplined search in booklet form. Unfortunately the authors did not explicitly identify that sentiment as the result of Quakerism’s Inner Light tradition.

At another perfectly classic Quaker juncture, VOS cannot resist criticizing the needless grief arising from the stern legalism of the Judeo-Christian tradition, by strongly rejecting “almost completely the traditional approach of the organised Christian church to morality, with its supposition that it knows precisely what is right and what is wrong, that this distinction can be made in terms of an external pattern of behaviour, and that the greatest good will come only through universal adherence to that pattern.”

The eleven authors add, “Many other groups have already recognised that the kind of morality that includes a vehement and categorical condemnation of the homosexual is not Christian, for it lacks compassion for the individual person and it lacks understanding of the human problem.”

At the same time, the authors admit that it was difficult for them to come to definite conclusions “as to what people ought or ought not to do” instead of toeing the Levitical party line. They could not “produce a ready-made external morality to replace the conventional code.” This language, and this principled decision to insist on a living search for guidance rather than a dead mandate of “thou shalt nots,” is congruent with the deepest core of the Quaker way.

The real-world significance of VOS largely hinged on its ability to offer positive help—a guided, disciplined (as opposed to an aimless) search. It sets forth three design standards for a new sexual morality:

Toward a Quaker View of Sex concludes:

This search is a move forward into the unknown; it implies a high standard of responsibility, thinking and awareness—something much harder than simple obedience to a moral code. Further, the responsibility that it implies cannot be accepted alone; it must be responsibility within a group whose members are equally committed to the search for God’s will.

One of VOS’s key attractions is its wisdom on love: “Too much attention has been given to love as an ideal, good or bad, noble or sentimental; too little to it as a form of action, a continuing and developing experience.” In compellingly contrarian theological terms, it asks, “Can we not say that God can enter any relationship in which there is a measure of selfless love?”

VOS’s greatest value, therefore, came from its radical ability to reimagine—and to model for the rest of the world—Christian morality as a disciplined search rather than a draconian discipline. It declared that love is to be found in action more than in sentiment: it is a manifestation of the Spirit behind all Creation, found in the character of homosexual and heterosexual alike.

The eleven authors of Towards a Quaker View of Sex not only achieve their aims, but probably accomplish a good deal more they hoped for. Doesn’t their pamphlet deserve far more appreciation than Quaker historians have so far given it? It is not a perfect analysis and has become largely outdated, but the authors anticipated this:

The questions are sweeping and time has not been unlimited; consequently our answers are tentative and incomplete. With the help and encouragement of Friends and others it is our hope that further study of the moral and scientific questions will become possible.

In my view, there are several ways to truly honor VOS, by building upon its foundations: Firstly, we could cite contemporary gay activists as thinkers, theologians, and authorities in their own right. But just as critically, we could identify VOS’s freedom of conscience message with our Inner-Light tradition. This would justify its view of sex as a valid restatement of centuries of Quaker theology; it might even directly engage evangelicals who believe in Satan (nineteenth-century Quaker minister Elias Hicks had challenged them). We can now completely disavow Freudianism, and place more emphasis on the healing, inspiring, and ennobling potential of love, instead of exclusively focusing on its many obligations. Finally, we can acknowledge that the culture wars are actively fostered by an opportunistic ruling class (in which sex is turned into quite a potent wedge issue, not to mention a weapon to harass political rivals–the trigger for the 1957 Wolfenden Report).

We should now be fifty years closer to realizing a coherent Quaker view of sex. Are we, indeed? What is the best way to commemorate VOS? With speeches and retrospectives, or by listening more attentively for the call of Spirit? Are we listening? Does the Lord have yet more light and truth to show forth?

Towards a Quaker View of Sex can be read at leavesofgrass.org/vos/frontcover.html

Mitchell Santine Gould enables financial advisors to collect client data for use in emergencies. Curator of LeavesOfGrass.Org, he is the leading authority on Walt Whitman's rise among “sailors, lovers, and Quakers.” Together with the LGBT Religious Archive Network, he documents the historical intersections between Quakers and gay people.