Grieving as a Spiritual Practice “You know,” said Judith, looking toward Lake Washington and the Cascade Mountains, “I think grieving could be a spiritual practice.” She placed a wayward strand of hair behind her ear, leaned back against the park bench, and turned toward me, her eyes searching, “What do you think?” I sucked in my breath. It was a novel idea. Nothing I had read in the many books on grief stacked next to my bed and nothing friends or family had said to me in the six weeks since my daughter died suggested that this God-awful pain could be a spiritual practice. Before Kelsey’s death at age 28 in a bicycle accident, Judith and I had often talked—on the patio of her brightly painted house in San Miguel de Allende or on walks through the Capitol Hill neighborhood of Seattle where she had a small apartment—about the transformative power of her own spiritual practice. “Maybe you’re right,” I said, a smidgeon of hope beginning to take shape and form for the first time in six weeks.

I’d had a profound, spiritual experience a year before Kelsey died. On a flight home from Philadelphia where I had led a three-day training on emotional trauma and afterwards attended a workshop on Quaker simplicity (although not a Quaker, I was drawn to the simplicity of Quakerism), I became engrossed in a book I had picked up at the workshop, A Testament of Devotion by Thomas Kelly. A Quaker teacher from the early part of the twentieth century, Kelly tells of living life on two levels: on one level going about the tasks of ordinary life—working, eating, meeting with friends—but on another, deeper level, praying without ceasing. Eventually the prayer becomes wordless, more of an openness to Spirit and to spiritual guidance.

Throughout the entire cross-country flight, I read the book, and I prayed but—as Kelly advises—prayed just below the surface while eating the meal served by a harried attendant, while adjusting my seat and tightening my seatbelt, and while looking out the window. The next morning back at home, I had a vivid half-awake kind of dream in which the sky parted to reveal a sacred truth. I exclaimed to my husband, “None of this is important.” He nodded. (I loved that he somehow got it, even though I hadn’t been at all explicit.) While I had no words for what had been revealed or even a clear memory, I realized that the activities that dominated my life—leading workshops on trauma, working as a consultant with the public schools, planning a vacation, finishing up a kitchen remodel—were only peripheral to what was really important. The realization that I was missing something important at the heart of existence led me to want to make my life more spiritual.

Judith’s suggestion, that grief could be a spiritual practice, gave clarity to my vision from the previous year and, more immediately appealing, seemed like a way to ease the anguish of grief or at least to give it meaning. I figured I’d start with meditation. I got out of bed soon after sunrise, brushed my teeth—strange how the mundane activities of life continued even though all else had fallen apart—went downstairs, made coffee, and covered the pot with a thick cozy. Although I didn’t know exactly what I’d do (I’d only tried meditating a few times in my life), the promise of coffee at the end was motivating. I settled on the end of the sofa in the living room; crossed my legs into a folded position, feet tucked beneath my knees; and peered through the French doors, searching for my special leaf. Every morning for the past several weeks, one solitary maple leaf at the bottom of the hill waved to me, like a light-hearted greeting from Kelsey, like the “Hi Mom” that used to begin our phone conversations.

I closed my eyes and set an intention to be open to Kelsey, wherever she was. I slowly inhaled and exhaled, paying attention only to my breath, and sank deeper and deeper into an inner space. After some time, images began to appear: the phone call from the police, telling me about the accident; the afternoon and evening spent trying to absorb the news. Everything surrounding her death—which had been a blur—came more sharply into focus. I let the images come, often weeping, for two hours. I didn’t know why it was important to relive those moments, but I felt better.

The next morning, I rolled out of bed and found my way to the same spot on the sofa. This time the images were of Kelsey’s life: her birth, toddlerhood, childhood, heading to college, beginning work, deciding to go to graduate school. It was like seeing a movie of our relationship. Again I wept, and again the session lasted for close to two hours.

Photo by Aron Burden on Unsplash

After those two days, I meditated for about 45 minutes to an hour. I never set a timer, just sat for as long as it felt right. My head was empty of coherent thought, the void filled by my breathing. Over the next days and weeks, meditating became an essential part of my day. Usually I breathed my way to what I thought of as the “velvet” place, a welcoming darkness in which I felt enveloped; cared for; and connected to something beyond myself and, as though through a fog, to Kelsey.

I incorporated other spiritual activities into my days, like taking walks on the beach and consciously trying to live in the present moment. I took a camera with me to focus on the small details of all that surrounded me: taking 50 photos of one log, photographing the progress of a hermit crab as it moved from one shell to another.

Since reading had been helpful to me in every crisis of my life and especially after Kelsey’s death, I combed through my husband’s books on theology (he had an extensive library that I’d rarely perused) and found Alfred North Whitehead’s book Process and Reality. My husband had paraphrased Whitehead, a twentieth-century mathematician and philosopher, during the dreadful hours after Kelsey’s death: “Nothing is ultimately lost but is gathered into God’s infinite care and returned to us as possibility.” I’d held onto his words like a barnacle clinging to a rock.

I skimmed through Process and Reality, landing on certain phrases that spoke to me of God and of Kelsey. In Whitehead’s words, God “persuades” opportunities to arise out of infinite potential, joining with us in an ongoing creative process. God was not responsible for Kelsey’s death but, to use an anthropomorphic metaphor, was walking and weeping with me, continually offering new possibility. God and Kelsey—for it seemed they weren’t separate—were present in Judith’s suggestion that grieving might be a spiritual practice, present during my morning meditations, present in the leaf that waved to me each morning. God and Kelsey were continuously offering new possibility: in my meditation; my reading; my desire to live fully in the present; and, especially, in my increasing receptiveness to all that God and Kelsey were offering. After a long career in education—teacher, school psychologist, and consultant—Barbara Bennett, along with her husband, retired to a small island off Washington State’s Olympic Peninsula. Most of her time is spent gardening, walking on the beach with her dog, writing, visiting friends, and taking part in her Quaker meeting. Spiritual Practices for the Pandemic

An offering of ways to stay grounded during anxious times. Mathilda Navias 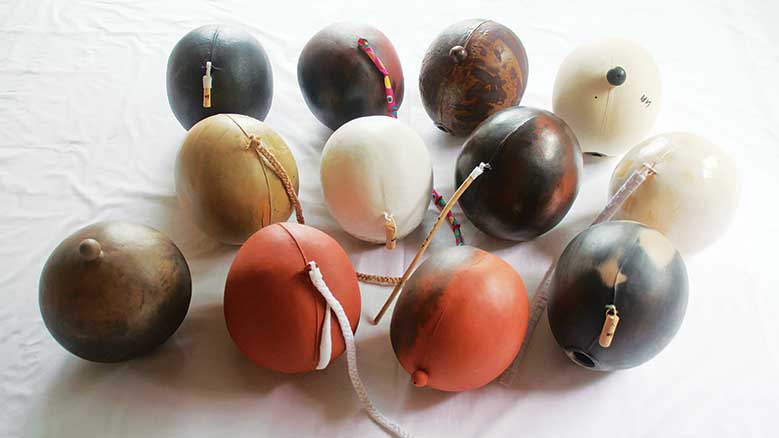 Art Exhibitions as a New Ministry

Art as a door to the spiritual. Jiae Paik