Jim Corbett was a brilliant and original thinker and writer; he was a fearless activist, who insisted on putting his Quaker principles into action rather than just talking about them. He was also a rancher, a goatherder, and an expert at living simply and close to the earth.

Corbett grew up in Wyoming, a descendant of Blackfoot Native Americans, Kentucky pioneers, and Ozark Mountain mule traders. As a child, he taught himself to be comfortable with discomfort—at ease with hunger, cold, and pain—and to detach himself from social expectations. A convinced Quaker, Corbett was a quiet, soft-spoken, unassuming person. For much of their life he and his wife Pat lived very simply in an old salvaged house trailer.

As a student, Corbett breezed through Colgate University in three years and then went on to earn a masters in philosophy at Harvard in only one year. Throughout his life, he held a variety of jobs including philosophy professor, librarian, park ranger, cowboy, anti-war organizer, and Quaker activist. But he was always a rancher at heart. For a while, he lived with a group of semi-nomadic goatherders in Mexico.

Over the years he became severely crippled by rheumatoid arthritis—his hands and feet were so deformed that he had to wear tennis shoes with holes cut in them, and he could write and type only slowly and with difficulty. But that didn’t stop him from doing what he felt called to do.

In 1981, Corbett learned of a Salvadoran refugee who had been caught by the United States Border Patrol. He located the man at a detention center, where he discovered hundreds of Central Americans who had fled U.S.-sponsored violence. This influx of refugees was during Ronald Reagan’s presidency when U.S.-backed right-wing governments in Central America were killing and torturing labor leaders, students, church activists, and their relatives. Refugees fleeing the violence (sometimes entire families) were led north by paid smugglers called “coyotes,” but sometimes they were just abandoned in the desert to perish in the intense heat. Those that survived would usually be caught by the U.S. Border Patrol and immediately deported, often to face torture and death.

As a Quaker who acted on his beliefs, Corbett didn’t just stand by and let such injustice happen. He and his wife began secretly housing refugees in their home in Tucson, Arizona. He recruited John M. Fife III, a Presbyterian minister, and Ricardo Elford, a Catholic priest, and together they started the Sanctuary Movement. Corbett mailed letters to 500 Quaker churches and groups, seeking their help. They then organized an underground railroad to Canada—a system for passing refugees from church to church across the country in violation of immigration laws. This effort involved hundreds of Quaker meetings and other churches.

In his first book, Corbett recounted trying to locate that first refugee. He inquired of the border patrol and then the immigration department, only to find neither had any intention of putting an ordinary concerned citizen in touch with any refugees. Then he remembered that he shared his name with a well-known former mayor of Tucson. Corbett was generally quiet and soft-spoken, but when he called the appropriate authorities this time, he announced in his best authoritative voice: “This is Jim Corbett, here in Tucson. I need the name, number, and current location of the Salvadoran male you picked up yesterday afternoon.” It worked, and he was on his way!

Corbett himself went out to guide refugees to safety. His trips involved long walks across the desert that often lasted the entire night. Before going, he would always conscientiously phone the authorities to inform them of his intentions. They would frantically look for him, but not once did they find him. His strategic routes went through a hostile area of the desert border country that the authorities never searched because they were sure no one could cross there and survive. He made these dangerous journeys in spite of his twisted, crippled feet.

The Reagan administration was not happy with these refugee rescue missions and worked hard to put Corbett and his cohorts behind bars. The Central Intelligence Agency infiltrated Quaker meetings and other churches, but the agents were usually easy to spot. They assumed that all Quakers were countercultural, and so they would show up in brand new Birkenstock sandals and hippie-style clothing!

Corbett and 11 others were eventually arrested and stood trial in 1986. Eight were convicted but given suspended sentences. On hearing the verdicts, Corbett stood and announced to the courtroom: “The work of sanctuary will continue exactly as it has. We’ll stand trial as often as we have to.” He went on to help thousands of Central American refugees throughout the 1980s.

As the flow of refugees tapered down, Corbett turned to other pursuits. He was profoundly concerned about man’s relationship with nature, and in 1988 he led a group of 30 investors to buy 135 acres in a rare and vulnerable riparian area east of Tucson. Some lived nearby or in Tucson, but most (like my wife and I) supported the project at a distance. This initiative was named the Saguaro-Juniper project by virtue of the overlapping presence of saguaro cacti and juniper trees on some parts of the land. Today the corporation counts around 60 associates and controls more than 10,000 acres.

The land has a stream running through it and forms part of a 40-mile wildlife migration corridor. One of the purposes of the Saguaro-Juniper project is to restore the land to its original state. Another purpose is to demonstrate that humans can coexist harmoniously with the environment.

When we acquired the land, it was badly overgrazed. We instituted sustainable grazing in a way that allowed the land to recover. Native grasses have returned and new trees are coming up. There are hawks, eagles, falcons, wild turkeys, and a Mexican jaguar has been spotted on the land—the first U.S. sighting in over a century.

We wanted to demonstrate that this kind of land restoration work can be done alongside humans coexisting with nature. About 150 people live along the nearby San Pedro River. They form a small community with the musical name of Cascabel—Spanish for rattlesnake—which includes an active Quaker worship group, a productive community garden, and a pleasant camping area for visitors. Cascabel also has an annual mesquite milling party, where they harvest seed pods from mesquite trees and mill them into flour.

Corbett realized that there were few retreat centers available for solitary retreats, so the Cascabel Conservation Association was formed. They opened two retreat houses, each in its own beautiful remote desert location. One has a straw bale cabin, while the other has a platform tent under a ramada. These are available for anyone to use, regardless of religion, or lack thereof, and at no cost.

Corbett developed goatwalking into an art. He would wander the desert with goats for weeks at a time. The goats would forage as they went, and Jim would drink their milk and forage as well. It was a way for him to go on solitary meditative retreats without having to carry any food or water. He pointed out that this way of living was pastoral nomadism. It is how the Plains Indians lived, and it’s how we are told that Moses led his people in the desert for 40 years. Many Bedouin and Mongolian herders still live this way today.

Corbett saw goatwalking as a form of errantry, which he defined as “going outside of society to live according to one’s inner leadings.” My wife Betsy and I once joined a group of six that joined Corbett on a goatwalk. We spent several days out on our land accompanied by two personable milk goats. Corbett asked us to carry no food except some oats and raisins. He taught us how to live with goats and how to milk them. The milk was delicious. Along the way we found wild mustard greens, lamb’s quarters, cactus blossoms, and other edibles. We were never hungry. The goats were delightful companions. They soon decided we were part of their family, and every time one of us headed into the bushes on personal business, the mama goat would follow, trying to round the family member up to bring him or her back to the herd!

Corbett realized that it was almost impossible for most modern urban humans to understand the idea of living in communion with our natural world. He saw goatwalking as an opening to allow us to experience that communion. When I went out on the land on my own once, he told me, “Don’t take reading or writing materials. Just be there and soak in your experience of the wilderness.” Such is basic Buddhist practice.

Corbett could quote ancient texts from Western and Eastern thought as easily as he could explain plant ecology or goat society. His thinking and writing reflect his deep explorations into mystical Catholic and Jewish traditions, as well as Buddhism, Taoism, ancient Chinese philosophy, and the practices of Mongolian nomads.

In his writing, Corbett developed a philosophy that embraces not only humans, but all life on Earth. He extended Quaker principles to apply to all of Earth’s creatures and ultimately to all of creation—there is that of God in all nature. Regarding environmental preservation, he followed a third way between the two extremes of exploiter and environmentalist by advocating that humans and nature can coexist respectfully. He had a close relationship with his animals and treated them well, but still they were part of the food chain. He once detailed how to humanely kill one’s food, explaining, “I try to avoid eating anyone I haven’t known and cherished.”

Before Jim Corbett died in 2001, my wife and I were privileged to be involved in some of Corbett’s projects. He was a remarkable person who delved deeply into biblical and Quaker philosophy and who spent his life transforming his Quaker principles into direct action. He encouraged all of us to do the same.

You can learn about the current work of the Saguaro-Juniper Corporation at www.saguaro-juniper.com. Corbett’s book Goatwalking: A Guide to Wildland Living can be found online in used-book outlets, and his other title A Sanctuary for All Life can be obtained through Howling Dog Press (www.howlingdogpress.com). 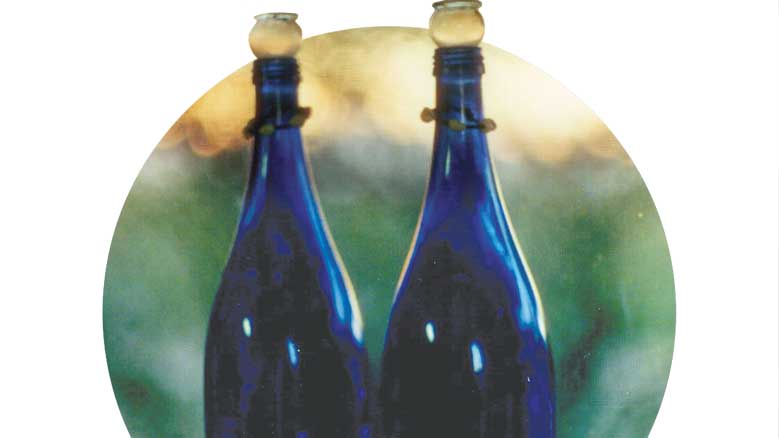 A Quaker Jewish path along walls and borders, both physical and spiritual. Deborah Mayaan