Viewpoint: Teaching our values, not our disapprovals

While my own perspective on Jennifer Arnest’s “The Gun Play Dilemma” (FJ Apr.) might be more ironic than most, I doubt it’s completely unique. I was raised as a Quaker, went to a Quaker college, and taught at a Quaker summer camp for a few years. I may not be a Friend, but I’m a friend of the Friends at the very least. My work specialty is staging violent conflict for plays and movies, including lots of play with toy guns, as it were. (My first book, The Theatrical Firearms Handbook, just came out in April.) It’s a career path I’ve studied for decades, and it has taught me things about myself along the way.

When I was growing up, my family had a “no toy guns” rule similar to Arnest’s. Over the years, with negotiation, it eventually became a ban only on realistic, modern toy guns: sci-fi Star Wars blasters were acceptably removed from reality while G.I. Joe weapons were not. The swords and bows of Robin Hood were okay, but the guns of the A-Team were not. I got around the rule by going off into the woods and carving my own toy guns with a pocket knife (which probably was a better life skill and more creative anyway).

People, especially kids, like stories. And stories need conflict. Yes, there are other forms of conflict besides overt violence, but many of those go right over a kid’s head, and few can compete with the immediacy and the compelling nature of having to physically stand up to a violent bad guy. How do storytellers establish this need? They do so through violence and by having a character do bad things, often with specialized tools. Is violence ever a good first choice? No. But characters who always do everything perfectly make for really lousy stories.

When was the last time you saw children at recess playing Johnny Appleseed? What would there be to do? You could perhaps sleep on the ground, plant some seeds, and try to talk the Indians into converting to Christianity, but it would not make for a particularly popular game. Johnny Appleseed’s father was a minuteman soldier in the revolution, and that story is still played out regularly, whether on AMC’s new series TURИ (which brought me a couple day’s union-scale stunt pay) or in the streets of Colonial Williamsburg, by little kids with wooden toy guns.

My challenge to those who try (probably in vain) to circumvent violent pretend play in your children and students is this: what alternate forms of conflict and struggle can you offer them? Any alternative should provide engaging drama, healthy competition against something, worthy obstacles to overcome, heroes to emulate, and an expression of their boisterous physicality. Without this kind of compelling alternative, all you have left is “shame on you for wanting excitement.”

If your kid, like Arnest’s, wants to shoot “love bullets,” the only reason left to object is that the subject makes you personally uncomfortable by association. Own up to that, instead of thinking you are nobly protecting your kid from society’s evil programming. Why not just admit, “That makes Mommy really uncomfortable, because I don’t like anything to do with guns or bullets. Can you throw love snowballs at me instead?”

Old-school Quakerism—the kind that disallowed dance and stage shows and music—could not last in modern society. How will modern Quakerism strike its own balance of peace and activism? Instead of just decreeing that guns are bad, how about using a child’s interest to start a conversation? Ask what happened that these people need to shoot at each other, and explore whether the antagonists might also have families they love, or are capable of doing good things? You’ll still be ruining the poor kid’s game for a time, but at least they might actually learn something about what Quakers value, instead of just what they disapprove of.

As a parent, I appreciate that pretend guns are generally less likely to hurt siblings than fists or pretend swords. As a theater and film professional, college instructor, and former kid, I’ll choose discussion over chastisement any day—at least when I have the patience and perspective to think about what I’m doing.

Now if you’ll excuse me, I have some work to do; after teaching today’s final class of the semester, I’ve got an unarmed stage combat class to run, a crossbow to finish building for a school production of Robin Hood, and some notes to email out over the blood and vomit effects used in a rehearsal last night, all before the kids come home from school.

Kevin Inouye lives in Richmond, Va. His website is at kevininouye.com. 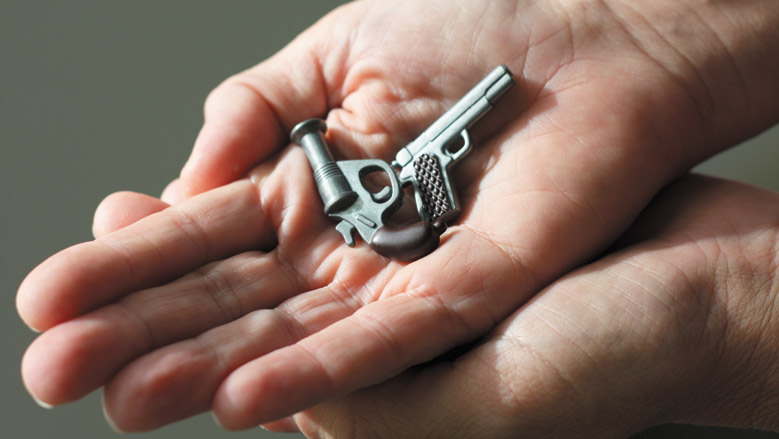 Who is really to blame?

4 thoughts on “Viewpoint: Teaching our values, not our disapprovals”