Why I Left … And Why I Came Back Aud Supplee giving testimony at the church she attended after leaving Friends. Photo courtesy of author.

In 2009 I walked away from my Quaker meeting. This wasn’t a parable. I wasn’t reenacting the prodigal son. I didn’t gleefully leave my meeting to skip down a hedonistic path. One day, I quietly slipped out the door in unspoken desperation.

Months before abandoning my meeting, I’d begun to question my faith. So often, while sitting in worship, it felt less like a time of silent “waiting on the Lord,” and more like a time of scattered wondering quietly to myself. Why does this bench hurt my back? Why can’t I sit still for five minutes before my behind gets numb? Has enough time elapsed for me to cross my legs again without appearing fidgety? Why won’t my mind shut up long enough to open up to a message from God?

From there, the questions became, Do I belong? Am I spiritual enough to even be here?

And finally, I wonder if I need a sermon instead of silence?

When an opportunity arose to attend a Christian church, I took it. They called themselves a “church plant.” They were so new they met in the auditorium of a local middle school because they had no building of their own.

That first day, I entered the darkened auditorium to the sound of U2 blaring from giant speakers on either side of the stage. As Bono sang, “I still haven’t found what I’m looking for,” I felt a hopeful stirring in my soul. Had I found what I needed?

As I located an empty row near the front and eased onto an auditorium seat, the recording ended. The padded seat was more comfortable than a meetinghouse bench, and I settled in.

A live band took the stage and a grinning kid, barely out of his teens, stepped up to the microphone stand. He strummed a few opening notes on his acoustic guitar and heartily greeted the congregation. Sudden doubts began to form in my mind. This seemed more like a concert than a church service.

When he invited everyone to stand and sing with him, I let out an indignant huff. I had just gotten comfortable. Besides, how could I sing along when I didn’t recognize the opening notes? I stood because he seemed like a friendly guy and had asked so cheerfully. Still, I vowed to myself that I would not sing. I didn’t know the words.

As if some celestial being knew I needed help, two over-sized screens on stage magically flashed to life. Each one displayed the song’s lyrics. Not knowing the words was no longer an excuse, but I still didn’t know the tune. With arms folded, I read along with the words on the screen. The song, written by contemporary Christian music singer David Crowder, offered a moving musical message. The words, though sung, reminded me of vocal ministry. And they spoke to my condition: “So lay down your hurt / Lay down your heart / Come as you are.”

Those lyrics, as well as others I heard that day, pierced my heart and allowed the Light into my soul. As the weeks passed, I not only learned the different songs but started singing along. Over the next two years, I joined the tech team and controlled the slides that played across those giant screens. Every message each slide revealed, whether song lyrics or Bible passages, brought me deeper into the wonder of God’s love, His glory, and His grace. I finally uncovered a peace I thought I’d lost.

Then came the pandemic of 2020. Schools closed, including the middle school that hosted my new church. The pastor began pre-recording his messages. With no live music or a live congregation, my job controlling slides ended.

At the same time, my Quaker meeting began worshiping virtually in real time. I joined them from the safety of my home and gazed into my computer screen. Faces of Friends I’d known before smiled back.

After a two-and-a-half-year absence, I felt ready to return to the silence. I still experienced the occasional painful twinge on my backside from sitting still, but I no longer wondered if I was spiritual enough to be a Quaker. Now I know I am. And in the silence, when my mind won’t settle, I can remember the songs that praise God’s love, grace, and light. 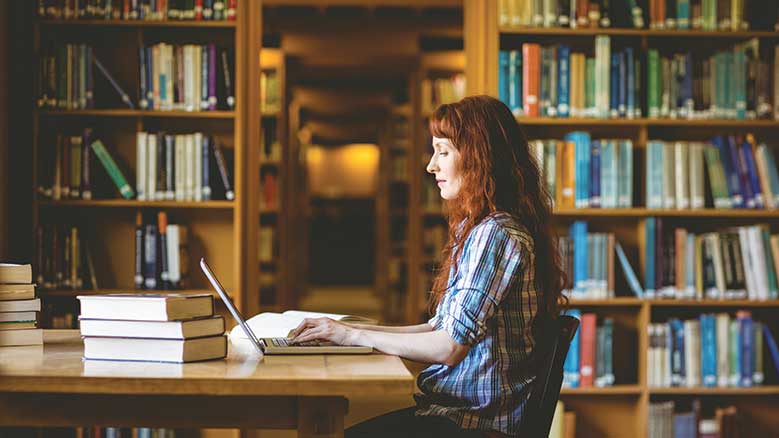