Stewardship of Our Nation's Wealth

Stewardship of the Earth and its creatures is basic to Quaker faith and practice, a natural concomitant to care for the human family. I see the federal budget as a sign of how well we as a nation exercise responsible use of our wealth in the care of humankind and our common home. The administration’s budget plan for the next five years, mirrored in most respects by Congress, fails the test.

The priorities are clear. The plan projects rises for defense (10.8 percent) and homeland security, mainly antiterrorism (4.6 percent), and sharp cuts in domestic social programs (over 16 percent). When defense, off-budget military funds, nuclear weapons programs, and CIA special forces are tallied, they total $600 billion next year alone. Social programs, by comparison, will get about $370 billion next year. Furthermore, proposed tax cuts, mainly for the wealthy, will cost about $250 billion under the plan.

Defense funds for Iraq reconstruction have been poorly used. Millions for health centers were spent mainly on security, producing only 20 of the promised 142 according to the New York Times. An analysis by the well-regarded RAND Institute concluded that the single most important condition for support and stability among Iraqis is access to healthcare and environmental health; this would both encourage confidence in legitimate authorities and promote security to allow reconstruction.

The implications of this resource-use plan for the well-being of peoples and habitat are grim. It will add over $1 trillion in deficits to the national debt. This will weigh heavily, demanding tax rises and more program cuts. At the same time, over 46 million people—many are children—have no health insurance, and employers are providing less each year. Fundamental to all other determinants of health is a secure, minimally adequate income or its equivalent, as is well known; but this is almost never acknowledged in the U.S.

Congress spent weeks debating differences in various budget plans—a matter of percent of funds—without acknowledging the "elephant in the room," i.e., the structure of the remaining 94 percent, top-heavy in military support and tax relief for the wealthiest.

The budget proposal specifically reduces programs for the poorest families. This includes financial aid, childcare, housing, transportation subsidies, and food aid. It also cuts monies for the Centers for Disease Control and Prevention, and ends entire preventive services and healthcare services grant programs to states. Either these will be made up in state flat taxes, which disproportionately affect low-income people, or public support will vanish to be replaced by higher risks to health. Veterans’ healthcare also will be cut.

One impact of reduced public funding for contraceptives, as researchers suggest in a recent report, is declining use of contraception, with consequent increases in unwanted pregnancies and a slowdown in the decline of abortions, especially among poor and minority women.

At the same time, the plan contains 13 percent more funds for teen "abstinence-only" education, despite academic research showing that participants’ rates of sexually transmitted diseases were no different from, and possibly worse than, nonparticipants’, regardless of whether they had, by their own definitions, "abstained." Several states have now refused federal funds for such programs, citing ineffectiveness. Moreover, a recent court ruling ordered the government to stop funding a $1 million grant to a faith-based organization that taught Jesus Christ would help teens abstain, in a suit filed by the American Civil Liberties Union.

Continuing its answer to the increasing loss of healthcare coverage, the administration offers new variations of the same: expansion of privatization of tax-funded programs, while cutting Medicaid for the poorest citizens. This solution centers on very high deductible insurance for coverage of catastrophic illness. This does little for encouraging preventive care and little for most uninsured people, mainly benefiting the healthy and wealthy—and the for-profit insurance industry.

In meeting the United States’ worst natural disaster, Hurricane Katrina, the Department of Homeland Security has had several scathing official reviews. Even with increased funds it is predicted to be ill-prepared for the upcoming hurricane season, having not yet reconfigured FEMA. At the order of the President, however, it has opened a new Office of Faith-Based Organizations. The purpose is said to be to coordinate disaster relief among religious groups; this becomes one of 14 other similar offices dispersed throughout government agencies.

Lack of coordination among health and disaster relief agencies resulted in health threats to New Orleans hurricane evacuees and returnees. A Columbia School of Public Health survey, six months post-disaster, reported that almost half of the displaced victims, mainly poor and black, had lost their health insurance. Displaced children’s chronic diseases and mental health and behavioral problems had increased from the pre-Katrina period; they were also many times more likely to lack prescribed medications, and had missed months of schooling because families were forced to move three or four times.

This budget will slow health and safety regulation and alternative energy and transportation development relative to heavy subsidies for the fossil fuel and nuclear power industries. Global warming research implies acceleration in alternative energy sources and air pollution control to avoid the associated burden on health and natural disasters. Moreover, the Superfund, a resource for cleaning up toxic sites and to prepare for our first permanent nuclear waste site, will be exhausted before the site is needed in 2012—a waste problem that advocates of more nuclear power plants do not address.

Although recent studies are warning that the U.S. may lose its edge in science and technology, the plan calls for cuts in education. Almost as worrisome is a new law that allows for-profit, online college degree programs to access increasingly scarce federal student aid funds. The effect is likely to boost enrollment in these programs, where neither students nor instructors need ever engage in face-to-face discussion. It is also likely to siphon funds from on-campus universities, with their advantages of exposure to diverse peers and mentors, community-building, and organizational leadership and experience that build the skills of citizenship as well as professional and scientific excellence.

These uses of our vast riches overflow with consequences for other peoples and our shared environment. We as Quakers and all who share our values must remind the press, public, and policymakers of our common responsibility to be good stewards of our abundant wealth and power. The task also gives us an opening for a new collaborative link with evangelicals who recently accepted a report on the environment, civil rights, and resource-sharing, "For the Health of the Nation: An Evangelical Call to Civic Responsibility."

In 1981, I founded Rural Southern Voice for Peace (RSVP) with support from Celo Meeting and the Arthur Morgan School…

Bringing the Peace Testimony to Washington 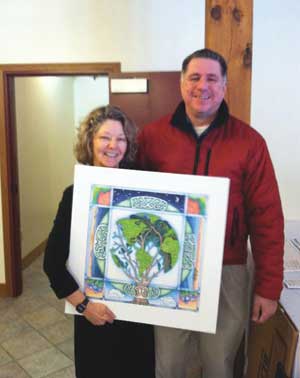