Strained, Breathless, and Hurried: Learning from the Life of Thomas R. Kelly

The breakneck pace of our over-scheduled lives often serves as an obstacle to the cultivation of spiritual wisdom. For some, the lessons of the spiritual life are learned the hard way. The life of Quaker writer Thomas R. Kelly demonstrates that those lessons, while transformative, can come at a steep price. In the end, the wisdom Kelly gained was not what he originally sought, and the suffering that facilitated it was devastating to him and to his family.

Thomas Kelly (1893-1941) eloquently describes the stress and anxiety many of us feel today in the final chapter of his spiritual classic, A Testament of Devotion. He writes, "The problem we face today needs very little introduction. Our lives in a modern city grow too complex and overcrowded. Even the necessary obligations which we feel we must meet grow overnight, like Jack’s beanstalk, and before we know it we are bowed down with burdens, crushed under committees, strained, breathless, and hurried, panting through a never-ending program of appointments."

Kelly wrote of this kind of life from experience. The strain he put himself through stemmed from his passionate desire to make a name for himself as a scholar. Kelly finished his PhD in philosophy at Hartford Theological Seminary in 1924 and began his teaching career at Earlham College in Richmond, Indiana, the next year. Though he grew up in the Midwest, he desperately wanted to find a position that to him carried more prestige. To make himself more attractive to potential employers, he started a second PhD. This time he sought out the finest Philosophy department in the world and enrolled at Harvard University. While studying at Harvard, he served as a visiting professor at Wellesley College in 1931-32. Though he hoped his study at Harvard and experience at Wellesley would yield a teaching position in the East for the fall of 1932, the Depression was on and no suitable opportunities arose. This forced him to return to Earlham, and as Douglas Steere reports, this retreat back to the Midwest "almost crushed" him. In the spring of 1935, he was offered a position at University of Hawaii. He found the opportunity to teach in Hawaii an attractive one because it would allow him to teach and conduct research on the philosophies of China and India. It felt like progress.

In the spring of 1936, Thomas Kelly’s wish was granted. Haverford College in Philadelphia invited him to join the faculty of their Philosophy department, yet he had not reached his goal of teaching at a prestigious Eastern college unscathed. As he spent the summers of 1932-1934 in libraries working on his Harvard dissertation, his health deteriorated; kidney stones, nervous exhaustion, depression, and a severe sinus condition plagued him at various times in the mid-1930s. Steere notes that during the spring semester of 1935, Kelly "got out of bed only to go to his classes and returned at once to rest again." In February 1936, he had surgery to correct a sinus condition that was exacerbated by the humidity in Hawaii. On top of his exhaustion, he and his family accumulated significant debt by moving across the country four times in 11 years.

After several years of hard work, Kelly paid to have his Harvard dissertation published in the summer of 1937. Though he had secured an attractive job and added a technical philosophical monograph to his CV, he still wanted the second PhD, perhaps feeling that a Harvard degree would grant him the scholarly prestige he sought for so long.

Then, at the very moment that would have validated all of his hard work, tragedy struck. During his oral exams in the fall of 1937, he had an anxiety attack. His mind went blank— just as it had at the defense of his first dissertation at Hartford. While he was given another chance at Hartford, this second time he would not be so fortunate. The Harvard committee, which included Alfred North Whitehead, failed him partly out of concern for his health, and informed him he would not be given a second chance to defend his dissertation. Kelly was devastated and sank to such a low place his wife worried that he might try to take his own life.

Though he provides no personal account of what happened after his crushing failure, by January a definite change was apparent in his writing and lecturing. His biographer writes that in November or December of 1937 he was "shaken by the experience of Presence— something that I did not seek, but that sought me." As Kelly hit rock bottom, he realized that he could not reach perfection and completeness through his ability and intense drive for success. His essay, titled "The Eternal Now" in A Testament of Devotion, is his attempt to explain the experience of the presence of God. He writes more personally in a letter to his wife from Germany the following summer: "In the midst of the work here this summer has come an increased sense of being laid hold on by a Power, a gentle, loving, but awful Power. And it makes one know the reality of God at work in the world. And it takes away the old self-seeking, self-centered self, from which selfishness I have laid heavy burdens on you, dear one." Later in the same letter, he writes, "I seem at last to be given peace. It is amazing."

Kelly articulated the anxiety and strain of modern life so well because he lived it. In "The Simplification of Life," the final chapter of A Testament of Devotion, he describes how his feverish existence was transformed into a life of "peace and joy and serenity." In this essay, he insists that the number of distractions in our environment is not the cause of the complexity of our lives. He confesses that he brought his intensity with him to Hawaii. Even in that idyllic environment, Kelly could not let go of his habit of trying to do too much.

The solution to the habit of trying to "do it all" is not found in isolating ourselves from our responsibilities in the world. The problem is a lack of integration in our lives. Kelly compares the voices within that pull us in multiple directions to a variety of selves that simultaneously reside within us. As Kelly describes it, "There is the civic self, the parental self, the financial self, the religious self, the society self, the professional self, the literary self." To make matters worse, the various selves within us are not interested in cooperating. Each of them shouts as loudly as it can when decision-time comes. Instead of integrating the various voices, Kelly claims that we generally make a quick choice that does not satisfy them all. Thus, instead of our decisions focusing us on what we need to do, we wear ourselves out trying to fulfill the desires of each one of the voices.

The remedy that Kelly offers to our unintegrated lives is not a simplification of environment but a life lived from the center. For Kelly, the Spirit speaks to us from our deepest center. God speaks through the heart. The key to a life without strain or tension is attending to the Spirit of God within us and submitting to the guidance we receive. This is the "simplification of life" to which the title of his essay refers. Kelly attests that when we take the many activities that currently seem important to us down into this center, a revaluation of priorities occurs.

Living an integrated life of peace and serenity from the divine center of the self is not easy. It entails falling in love with God in a much deeper way. It means making God’s plans for our lives the determining factor for action rather than our own will. It means being able to say no to some of the important things we are called on to do. For Kelly, learning to say no is not a means of retreating from the responsibilities of life. It reflects a passionate desire to center one’s life on the leadings of God. As he writes, "We cannot die on every cross, nor are we expected to."

Kelly learned from hard experience the toll that pushing one’s self to the limit can take. Though his life was changed through a profound mystical experience, the damage had been done; Kelly died of a heart attack at age 47. Because of his radical transformation, however, he provides us with a beautiful witness to a life lived from the center. Kelly assures us that God "never guides us into an intolerable scramble of panting feverishness." He shows us that a life of peace can be ours if we attend to God at the center of ourselves and yield to the Spirit’s leading.

Spiritual wisdom came at a steep price for Thomas Kelly. He did not take up the practice of surrendering to the Spirit willingly. After his crushing defeat at Harvard he sank to his lowest point, and from there he was forced to examine his goals and drive for perfection. When he could no longer avoid looking at his failure, when he abandoned his own striving, God became more real to him than ever before. In the end, God gave him the gift of peace that he was searching for in all the wrong places.

Chad Thralls is currently a visiting professor of Christian Spirituality at Fordham University's Graduate School of Religion and Religious Education. A Presbyterian with a soft spot for Quaker authors Rufus Jones, Thomas Kelly, and Douglas Steere, he was awarded a Gest Fellowship from Haverford Library Special Collections to conduct research on Thomas Kelly. He can be reached at chadthralls@ yahoo.com. 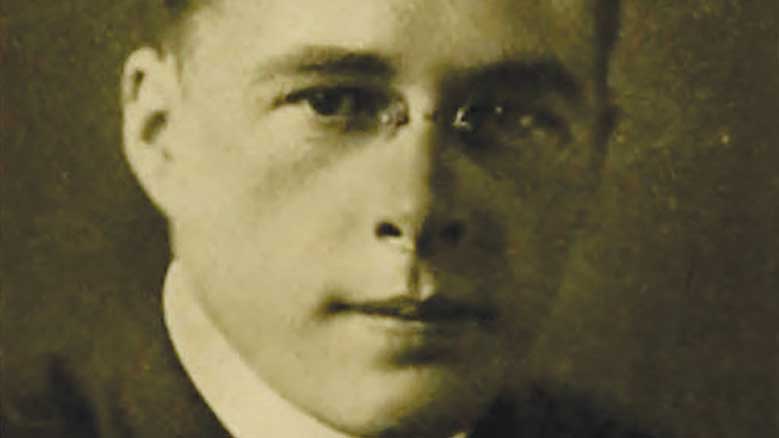 Finding the place where deep hunger can be met by deep joy. Jennifer Kavanagh