Confronting the Legacy of Quaker Slavery 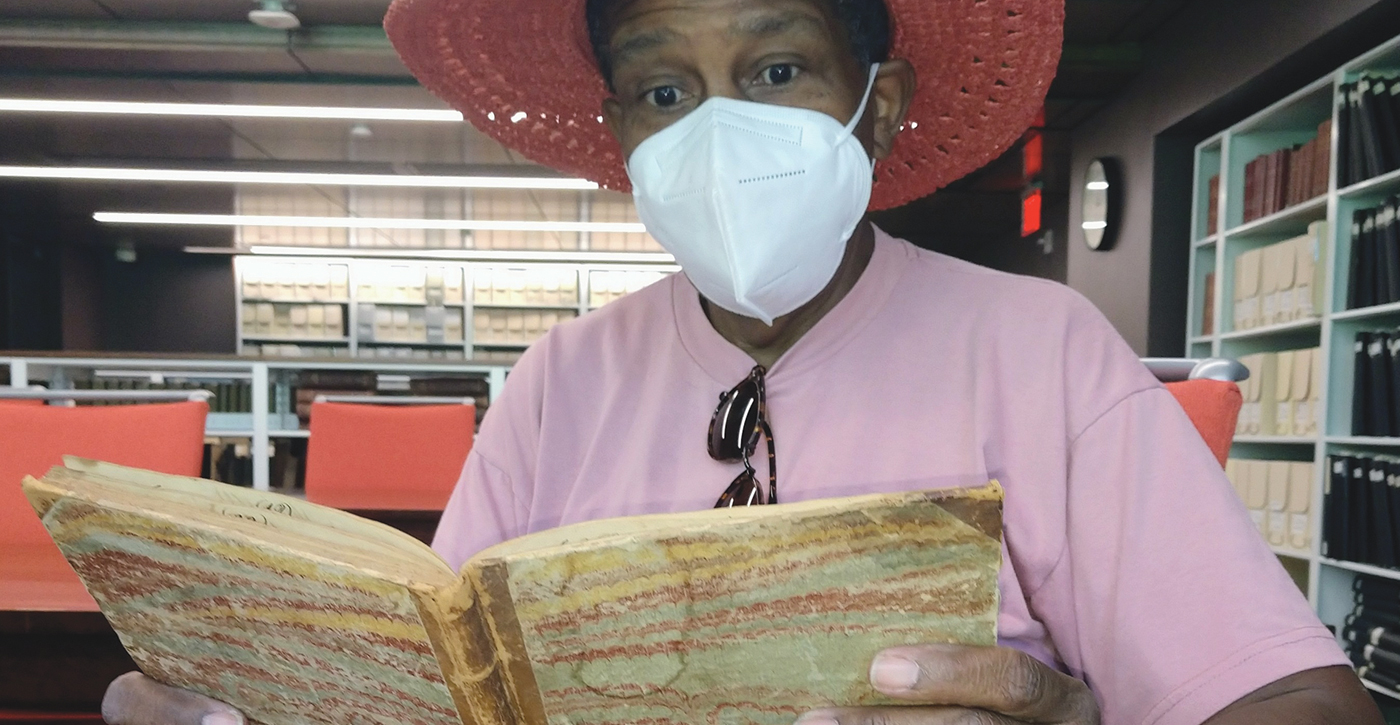 The author reviewing documents in the Quaker and Special Collections library at Haverford College. Photos courtesy of the author.

Inside the 339 Manumissions and Beyond Project

The 339 Manumissions and Beyond Project is a research and educational effort that is a response to the release of newly digitized manumission documents that reside at Haverford College in Pennsylvania. (“Manumission” refers to the legal document freeing a person from bondage.) The Quaker and Special Collections archive contains documents for 339 enslaved Africans who were freed between 1765 and 1790 by slaveholding families in Philadelphia Yearly Meeting (PYM), after slaveholding was banned within the yearly meeting. The goal of the project is to be a restorative, healing force that connects modern descendants with their enslaved ancestors, and to understand the lives of these first generations of “freemen.”

In the second half of the seventeenth century, Quakers, escaping religious persecution in Europe, emigrated to the American colonies. Quakers came to North America to start a new life that was free from the oppression they felt in England. How ironic and shameful that many Quakers, who immigrated to America for freedom, took away the freedom of Indigenous people and Africans. They were innocent people who were exploited as “personal property.” People were treated like animals: forced to labor against their will by threats and acts of violence. They were bred for profit. Quakers embraced the degradation of slavery because they did not recognize the exploited people as being human. Their acceptance and participation in this travesty were astounding moral failures. How would you like to have been enslaved by a Quaker?

Quakers were involved in the slave trade, both in bringing people from Africa and also in moving them from the Caribbean to the mainland and within colonies. From the 1680s to the 1750s, a substantial number of Quakers held people in bondage. With the unpaid labor of enslaved people, Quaker slaveholders had a leg up in gathering wealth. Some were among the wealthiest and most powerful members of society, and their wealth was used to create institutions that continue to this day, as well as generational wealth that continues to benefit their descendants.

As an African American Quaker, a member of PYM, and the founder of the 339 Manumissions and Beyond Project, my leading is to discover what happened to these 339 children of God and to find their descendants. We must acknowledge and confront this painful part of the history of Quakers. This article is to announce this restorative, healing action that I’ve begun with help from a group of Friends.

Modern Quakers need to understand how the legacy of Quaker participation in enslavement impacted both the enslaved and their descendants, as well as the Society of Friends and its relationship to African Americans today. Identifying those enslaved by Quakers is just the first step: we believe that the roots of Black exclusion from the Religious Society of Friends are embedded in slavery. The unacknowledged guilt of this moral failing is translated into turning away from rather than seeking repentance and reparation for the damage of this sin.

One lesser-known part of the history of slavery is that the medical profession advanced its knowledge through experimenting on enslaved Africans, often without anesthesia, with the hope that knowledge gained would help keep White people healthy. Many PYM slaveholders sold their deceased Africans to medical schools in Philadelphia for teaching and research, wringing a final profit from the enslaved person’s body.

PYM Friends finally united in their understanding of the evil of slavery in 1754. After nearly 70 years of consideration, they finally in 1776 demanded that all members cease trafficking in people, and manumit the people they held captive. As the tide of antislavery opinion was rising, many Quakers sold their enslaved people, while a few provided freedom. As slavery was forbidden, monthly meetings accepted the manumission documents as proof that enslavers had been eliminated from the Quaker community. Some enslavers left their meetings rather than comply. This is the reason only 339 manumission documents came to be in the Haverford College archives.

For those who were freed, we search for what happened after. How did people start their new lives? Did they have clothes, food, money, a place to stay? Did the Quaker meetings that had demanded the manumissions step in to assure a successful transition?

We know there were many challenges and threats. First, there was the danger of re-enslavement. Slave hunters kidnapped free Africans and sold them away. This was a very lucrative business. Second, there was the issue of trying to keep families together when only part of the family was manumitted. Third, in order to survive, many freed people and their children entered into indentured servitude for many years in order to ensure food and shelter. This was a different kind of “slavery.”

Because Pennsylvania had passed the first law requiring manumission of all slaves in 1780, the Philadelphia area at this time acted as a magnet for free and newly emancipated Africans. This surge of free Blacks also led to increasingly restrictive laws that later became the model for the “Black Codes” used in the South after Reconstruction: restricting rights to vote; to access the justice system; and to work, live, and marry. What happened to the 339 may be a window into how free Blacks found ways to bind together for mutual support, as well as confront an increasingly hostile social and legal system. One might say the foundation of institutional racism in America was laid at that time and place.

Mary Crauderueff (left), curator of the Quaker Collections at Haverford College, and David Satten-López (right), both organizers of the “Manumitted: The People Enslaved by Quakers” project, visiting the author’s house.

Let me comment on the events that brought me to this point. Shortly after the killing of George Floyd, Haverford College contacted me because of my work identifying unmarked graves of enslaved and formerly enslaved persons in Quaker graveyards. I was invited to help strategize about how to present this material to the public. While I was excited to learn of the existence of these manumissions, I couldn’t help but wonder why I had not been invited to participate at the beginning of the project when answers to some of my many questions might have been found in these documents. For me, that was a missed opportunity.

Nevertheless, I spent the next two years as a consultant to the project, helping others to understand the many questions these documents raise and how they invite research into Quaker archives. I was never offered compensation for my contributions. The questions that have arisen during this time define the goals of this project. They add to the questions noted above about what happened to these persons immediately upon being granted their freedom.

Did most hold on to their freedom, and did they live some semblance of a normal life? How many families were united? When they passed, were they interred, and where were they interred? (There are unmarked graves of the enslaved in a few Quaker graveyards.) Can we create family trees that connect to their descendants? How should we honor them and acknowledge their suffering?

How does all this fit into the current conversation among Friends and the wider society about reparations, reconciliation, and healing? Information about systemic racism is now widely available, documenting not only the day-to-day discrimination we sometimes refer to as “the Black tax” but the precise historical and legal moments when Black wealth and opportunity were destroyed and denied. If only Quakers had taken the important next step after recognizing the immorality of slavery to enfold the freed Africans with love, they might have stood shoulder to shoulder with their African American Quaker brothers and sisters rather than seeing these events as happening to others: to “them.”

We should start conversations about Quaker accountability and ensure African Americans are included in them. We also believe that Quakers should financially support and assist in the effort of the 339 Manumissions and Beyond Project and similar efforts as a form of reparative healing. And we believe that American Quakers owe an apology to African Americans for their involvement in the Atlantic slave trade and for all the harm that it caused.

As a Black Quaker, I have found many White Quakers to be very welcoming and open to me. I’m thankful for that. Unfortunately, I have also personally experienced much racism within the predominantly White Quaker meetings. We were all raised in America within the White supremacist culture, which impacts us all. I often wonder, sitting quietly on the bench in the meetinghouse, what were early Quakers believing when they were playing God with the lives of enslaved people? The White descendants of these Philadelphia Yearly Meeting enslavers worship with me in the meetinghouses built and paid for by the blood, sweat, and tears of my ancestors.

How should Quakers move forward? Quakers should ensure that our meetings emphasize listening to, striving to understand, and valuing People of Color and people of a different class. We should start conversations about Quaker accountability and ensure African Americans are included in them. We also believe that Quakers should financially support and assist in the effort of the 339 Manumissions and Beyond Project and similar efforts as a form of reparative healing. And we believe that American Quakers owe an apology to African Americans for their involvement in the Atlantic slave trade and for all the harm that it caused.

Correction: the original version of this article stated that Quaker colonization of the Americas began in 1681 with William Penn’s arrival in Pennsylvania. The first known Quakers to arrive in the North American English colonies were Ann Austin and Mary Fisher, who arrived in Boston in 1656. There were active Quaker settlements in Massachusetts, Rhode Island, New Jersey, and Maryland before the establishment of Pennsylvania. Avis Wanda McClinton is a Quaker preservationist. This article was written with assistance and input from Dennis Gregg, Bill Herman, Kitty Mizuno, Stephanie Leonard, Liz Oppenheimer, Tina Lawson, Wood Bouldin, and Rubye Braye. You can read about the full list of contributors here. An interview with Mary Crauderueff and David Satten-López. Martin Kelley Contributor’s List for Confronting the Legacy of Quaker Slavery

Avis Wanda McClinton has assembled a team of people to work with her on the 339 Manumissions and Beyond Project.…

4 thoughts on “Confronting the Legacy of Quaker Slavery”