Almost everyone knows what a Quaker business is . . . or rather, was. Great names of confectionery, banking, and sometimes engineering or chemicals from Victorian England easily spring to mind. To mention any one of those firms—especially icons such as Cadbury or Rowntree—is to evoke the caring, progressive, and generous industrialists who set the standard for employee welfare. Bournville, a model village on the south side of Birmingham, England, and the family firm that planned and built it are inextricable.

The idea of looking back to some golden age of Quaker industry as a sourcebook of inspiration, principles, or even models to emulate continues to exert a powerful attraction. Perhaps we think of the Quaker firm as an ideal: a touchstone, a concrete expression of sincerely held Quaker beliefs about the dignity of work and the value of human relationships. Of course, no hagiography is ever so simple. Working at Clarks in Somerset in the early days, for example, was perhaps no better than working in the sweatshops of London. If the popular image deserves to shape our beliefs about how a good Quaker employer should act, perhaps we should try to be clear about what lies behind the legend.

Alas, we can only guess as to what workers actually felt in the heyday of the Quaker workplace, but we can build a picture of what Quaker employers thought as they built their businesses. Not every Quaker firm can be held up as an example of progressive employment practices, even by the standards of the day. But it turns out that those who earned their iconic reputation were carefully constructed institutions and, surprisingly, often shaped by motivations and principles that we might not easily recognize as Quaker.

A vintage image of the sewing room in one of the C&J Clark factories. Via Wikimedia commons. C&J Clark archive.

The golden age of Quaker business knew nothing of today’s highly organized recruitment practices. Every decision came from the employer, and Quaker employers made no bones about preferring a certain type of worker, even if those preferences changed over time.

Women sometimes occupied an ambivalent place in the Quaker factory. George Cadbury believed that only women “of good moral character” should be hired, and married women should not work at all. It would make their husbands idle, and distract the women from the all important job of running the home. So each year, Cadbury would hire up to 700 girls, of whom some 100 would leave when they married. This view on the proper place for a married woman appears to have been very unusual in the firm’s home town of Birmingham at the time, where married women were often essential to factories. The only married women to remain in the Cadbury workplace were part-time cleaners.

If women’s prospects were constrained by strong moral principles, men’s employment faced the more brutal reality of plain economics. While Huntley & Palmers, a firm of biscuit makers, saw the value of retaining some older male workers to mentor the younger ones, both Rowntree and Cadbury would usually dismiss men when they reached 21 due to their rising wages, although Joseph Rowntree seemed willing to find them alternative work, if their father was still on the payroll.

Men were also affected significantly by the trend toward automation of the factory in the second half of the nineteenth century. As a result, firms were increasingly looking for less skilled workers. This completely altered the balance of power in the workplace. Skilled laborers had once been essential to the continuity of the firm, carriers of the know-how on which operations depended. They became more peripheral, however, as technology took hold and the size and complexity of the business increased.

Clearly older workers were no longer prized for their expertise but viewed in a negative light for having lower productivity than younger workers. Seebohm Rowntree even felt that factories were carrying hidden costs by retaining older workers who took full pay but could not operate at the required level. The Rowntree firm actually had a habit of forcing out unproductive employees who could not work harder. From this angle, pensioning off older workers may have had as much to do with the perceived burden on finances and morale of keeping them in the factory as it had to do with an altruistic concern for poverty in old age. Only those who could work in the required way deserved a place in the Quaker factory.

In many ways, Quaker employers considered labor just one more commodity that was influenced by market forces, like everything else. As such, relatively low pay, long hours, and unstable temporary employment were necessary in the bid to provide the consistent, affordable quality on which many Quaker firms built their reputation. If the late Victorian Quaker factories give the impression of creating a coherent, organic workforce that was united in living out the firms’ Quaker values, this does not signify there were stable, committed employment relationships that we might expect. It’s quite the contrary. The seasonal nature of confectionery businesses, in particular, called for large numbers of temporary workers who were engaged on a casual basis. At Huntley & Palmers, for example, a significant cohort of Christmas temps would come onboard each year, only to be let go again. The laws of economics were just as likely as any principle or moral standard to explain how Quaker employers behaved.

In all these ways, Quaker employers were quite clear about what kind of workers they wanted to bring in, on what basis, and until what point. This speaks very clearly to a careful shaping of the workforce, often exercised in a personal way by the founding family, until it became impractical to do so. To the contemporary ear—especially an American one—such selectivity, expressing executive or entrepreneurial power, does not sound strange. Yet it bluntly declares that the Quaker workplace was not simply an oasis of welcome for all who came looking for work.

The generous and broad-minded language of universal entitlement—for example, that no one should live in poverty while working—needs to be squared with the selection and control that Quaker employers actually used in allowing people to become and remain a part of their “beloved community.” What do we make of business leaders with such strong views on the proper place for women? Or employers who effectively chased out older and less productive workers? In what way can they serve us today as examples to emulate?

It is a fact that a number of large Quaker businesses in late Victorian England came to provide a relatively extensive range of employment benefits, welfare services, and recreational facilities. But every coin has two sides. Perhaps it was the businessman’s sense of alienation from the expanding industrial enterprise, the impossibility of knowing everyone and everything, that led to the loss of true human connection, which made industrialists such as Joseph Rowntree Jr. think so deeply about employee welfare and engagement. On the other hand, given the preference for casual workers among many confectionery firms, perhaps we should interpret the workplace amenities and benefits that some Quaker firms offered as simply a way of winning the loyalty of this precarious yet essential group of laborers, the better to ensure they would come back next year. Remember, too, that a driving principle for Friends was to run a successful business that could be sustained over time and serve the community in a predictable, reliable way. The Quaker business was not first and foremost a charity or welfare scheme.

To be fair to these Victorian industrialists, they clearly did something that was not inevitable: they shared gains of successful businesses with their workers at a time when there was little or no such expectation. Their example also went on to inspire society more generally, as some of their ideas were more broadly adopted for general employment standards. It could be argued that their success as businessmen made their example worthy of attention. If, on the road to success, their practices or behaviors were not always pure Quaker—or even recognizably different from other employers—we can look at their mixed motives and reassure ourselves that, in the imperfection or limitation of our day-to-day choices in the workplace, we can still chart a path that promotes the dignity of work and person. Originally from the United Kingdom, Anthony Fuller has a long interest in Quaker business. He currently lives near Princeton, N.J., and is a senior procurement leader, trying to apply Quaker principles to his everyday work. Although not a Friend, Anthony is actively engaged with the Friends community through the Quakers and Business Group. Racial exploitation revealed in the Rowntree company’s past 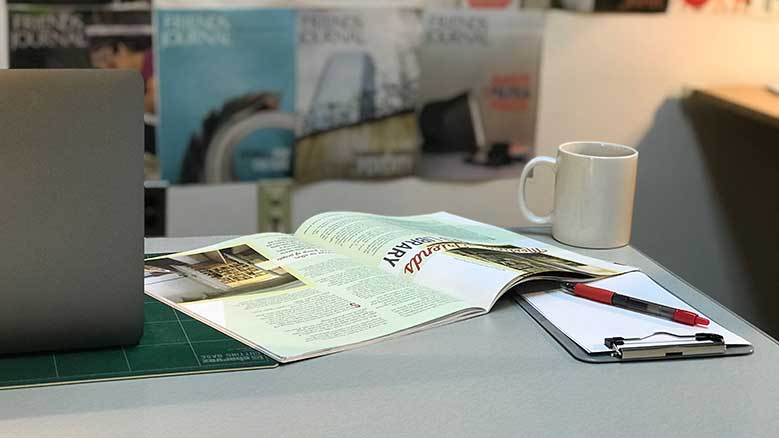 We're looking for submissions for our June/July issue. Entries due March 29. Martin Kelley