On Being a Quaker Entrepreneur I am a computer programmer, and had been employed by various types of businesses for about 25 years when I wrote the first version of the software that eventually became my own small business. It was just me in the beginning, but today Software4Nonprofits supports two people. We write and sell donation tracking and accounting software designed specifically for use by churches and charities. I consider our work to be not only a business but also a ministry. The way I write software and run my business reflects my personal values and the Quaker testimonies of integrity, equality, simplicity, and peace.

How did all this come about?

I had been involved in the financial concerns of Toronto Meeting for a number of years as a member of the finance committee and as the meeting treasurer. In the early 1990s, I helped with the purchase and setup of a small software program for tracking donors and donations, and issuing charitable receipts. This program began to fall apart after a few years, and it was clear that we needed a new solution. Being a somewhat-proud programmer, I figured I could write something better, and in 1994 Toronto Meeting began using the DOS version of my donation software, called appropriately enough DONATION.

In 1999 I rewrote DONATION for a Windows platform. After putting this extra work into the project, it seemed a waste not to share it with other organizations. I began giving DONATION away free of charge on the Internet, accepting small donations. By 2007 the program had about 4,500 users. They frequently told me how much they loved the software, but their occasional voluntary contributions didn’t cover much more than my web hosting.

By this time, I had also begun to consider quitting my full-time day job, which I liked, and using DONATION as the basis for a business. I met with a clearness committee from Toronto Meeting to help with this decision. In May of that year, I sent a notice to all the DONATION users to let them know that while they were welcome to continue using the software, they would now have to pay an annual fee if they wanted support and upgrades.

In my business plan, I had set up a three-tier introductory price structure based on the number of donors in a client’s system. I was extremely gratified by the number of payments coming in, but I soon realized I had made a serious miscalculation. I had assumed that most users would have the middle range of donors when in fact most of them paid the lowest fee. This incident turned into the first example of strong transparency in my business. I sent a second notice, informing everyone of my miscalculation, and I laid out a new introductory fee structure with slightly higher prices for users who had not yet paid.

Transparency and honest communication has remained an important principle. The program’s help file and manual include a revision history document listing all significant changes and bug fixes. When I become aware of a major bug in the program, I contact the users, explain the problem, and advise them to consider an upgrade as soon as possible.

Similarly, our pricing structure is clearly laid out on the website (whereas many of our competitors ask prospective customers to submit a form or to phone and request a quotation), and we help potential users to choose the least expensive version that will meet their requirements. We also outline limitations of our software and encourage inquirers to consider other products if our software will not realistically meet their needs.

Most of our users work with fairly small organizations, and many of them are volunteers working on their own time. They frequently lose track of the date of their annual payment and sometimes accidentally make a second payment for the same year. Obviously, we don’t accept such payments; we offer to either refund the extra payment or apply it to an additional year of support. I answer emails and phone calls at all hours, 365 days a year. And yes, we sometimes get support questions on “the day they call Christmas.” We have also turned down voluntary overpayments from users who want to thank us, explaining that we are a business and suggesting they instead put the money toward charitable purposes.

All this is not to say that we aren’t businesslike. If a user who hasn’t paid the support fee asks for help, we generally refuse until we have at least an assurance that the support renewal check is in the mail. This policy, in turn, implies a level of trust, which has almost always been justified.

I have also become aware of an interesting personal aspect of integrity. I am a nontheist. When I speak with users who work in churches or religious organizations, they sometimes conclude a telephone conversation with a theistic phrase, such as “God bless you!” I find it difficult to respond. Most of the time, I either let it pass or reply with a more neutral expression. I am grateful for their thanks, but I cannot with honesty reply in kind.

Our business is geared to nonprofit organizations, and we sell our software to all sorts of charities, from the sublime to the ridiculous. While there are a good many I would never personally support, one of my ethical struggles as an entrepreneur involved a refusal—the only one to date—to allow an organization to use DONATION. My decision was made after consulting several Friends for advice. The organization in question—a supporting body for the National Rifle Association—offended my Quaker pacifism too much. Since then there have been other clients (for example, army cadet groups) whose activities are certainly not in line with nonviolence and the peace testimony, but these instances don’t bother me sufficiently to withhold service. I also feel that since our software is a commodity product, I should, for the most part, allow anyone to use it.

Since the first version of DONATION was written for a Quaker monthly meeting, the software’s donor information fields do not include a title field (Mr., Ms., Mrs., etc.). While the rejection of titles is rooted in the Quaker testimony of equality, the absence of a title field in our software that is now available beyond Quakers is simply a holdover from its Toronto Meeting origin. It remains, admittedly, in part because over the years it has become increasingly difficult to add extra fields that were not part of the initial software design.

As much as possible, I try to consult the users about major decisions in our software development, and we’ve also done several online user surveys. One survey asked users about their interest in a bookkeeping program, and another inquired about interest in a web-based version of our software. The response for bookkeeping software was positive, and in 2012 I released ACCOUNTS, a program that includes completely automated fund accounting. The response to our inquiry about a web-based version of our software was mostly negative. Today DONATION and ACCOUNTS are available only as installed Windows programs, although there are various ways to share them between multiple users. Clients can also subscribe to our blogs, where they are invited to give advice and participate in beta testing of new releases.

One of our basic principles in software development is simplicity. I don’t want to create a complex program with the capacity to do anything any user has ever asked for or suggested. Instead, the criterion for adding a new feature is that it will be useful for a significant proportion of users. In turn, we often hear from users who tell us they love our programs for their simplicity.

Our two programs are geared for small to mid-size churches and charities. Both are priced low enough to be easily affordable, and the annual renewals for support and upgrades are optional; users who do not need these services are not obliged to pay. We also offer a feature-limited “lite” version of DONATION for very small groups (fewer than 100 donors) that is free of charge, except for a small optional fee for annual support.

By 2013, when I had a major health scare (I’m fine now), Software4Nonprofits had become profitable enough to nicely support two full-time people. I was able to hire a Quaker friend who has similar finance experience at both the monthly and yearly meeting levels to work with me. Although being an employer certainly has its challenges, it is great to be able to go on vacation (or to yearly meeting sessions or the Friends General Conference Gathering) without having to worry about answering all of the emails from our over 7,000 users all the time.

I have greatly enjoyed running my own business, with the continuing gratification of being told by users how much they love our software. My Quaker principles (which were also largely my personal principles even before I found Quakerism) help to inform my business dealings. I have no hesitations in using the following as the tagline on our website: “Simple. Powerful. Affordable.” 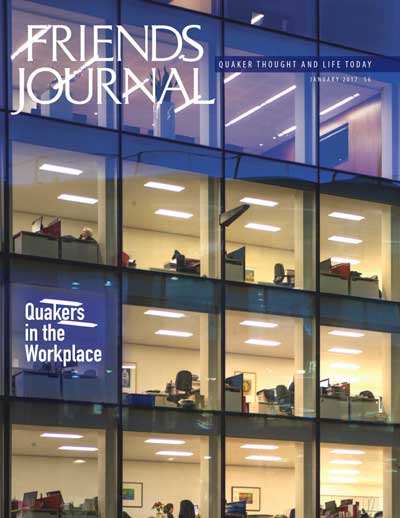 Dan Cooperstock is a member of Toronto (ON) Meeting who has been active at both the monthly and yearly meeting levels with finances, and is the owner of Cooperstock Software / Software4Nonprofits.com. 1 thought on “On Being a Quaker Entrepreneur”