I am a member, by convincement, of Britain Yearly Meeting (BYM). I have served in a number of roles within my local and area meetings, and I currently clerk the Friends House (London) Employment Committee. I also serve on the Quaker Council for European Affairs which meets in Brussels, and I have been a BYM member of the Quaker United Nations Committee in Geneva. In my international roles I have had the opportunity to work with Friends from other yearly meetings and was very fortunate to be able to attend the FWCC events in Kenya in 2012 and Peru earlier this year. The experience of attending the plenary in Peru was both uplifting and comforting to me as a member of the minority Liberal branch of the Quaker family. Like far-flung cousins in the faith, we came together in love and respect, and the joy amongst us was infectious. Our differences were played out in our main section-led meetings for worship, but we walked alongside each other in the Spirit and upheld each other in our personal experience of God.

Our key point of difference lies in where we locate the authority which underpins our faith: Evangelical Friends hold scripture as the primary authority, sometimes balanced by revelation through personal experience; Conservative Friends hold revelation as primary, as confirmed by scripture; Liberal Friends rely on revelation through experience alone. How can these fundamental differences be reconciled if we are to claim a common faith and members of the one church? It seems that in some respects our family branches, acting separately, may have more in common with other Christian denominations than with other branches within our own. Maybe Quakerism is now a church of separate denominations itself?

Our diverse positions on authority lead to a diversity in forms of worship, pastoral leadership, and the weight we place on doctrine. Clearly where authority rests upon scripture, the focus must be on doctrinal learning and orthodoxy; where authority resides in personal experience of God, how we behave as a worshiping group—orthopraxy—becomes all-important. Evangelical Friends may find it intriguing, even disappointing, that Liberal Quakers may appear very exercised about form, process, and language, and to focus on tradition and convention whilst never mentioning salvation for themselves or others. Yet in all our Quaker models, we display an intensity about living out our faith: we strive to do better, to live up to the standards which Jesus set for us in the varied social structures and cultures in which we find ourselves. Wherever the authority of Christ is seen to be revealed, we seek to follow it and honor it with integrity.

Can we identify other shared Quaker family characteristics? Our different attitudes toward theology and God’s revelation reveal common ground in our deep commitment to spiritual equality and universal salvation; indeed, this could be described as one of our distinguishing features as a world church. Another characteristic would be our Quaker business method, which, even if applied slightly differently in different cultures, is based upon direct corporate guidance by the Spirit toward unity, rather than any form of voting. Finally, our commitment as a peace church and works of social witness, rooted in our personal relationship with God and confirmed by scripture, define us as a world faith body.

Is it then the case that we survive on the world stage as a recognizable international faith, despite—or perhaps because of—our wide theological diversity? Quakerism has been able to adapt and thrive in the world, not outside of it, over centuries of rapid social and political change and across continents.

Mission has been central to both first generation and contemporary Evangelical Quakerism, as the faith is shared across the world by those outside of the Liberal orthopraxy. How are Evangelical Friends to understand the reluctance of unprogrammed Friends to talk openly about their personal faith, when the success of their own missionary work is so evident? When Liberal Friends hold back from articulating their personal experiences of revelation, on the grounds that they may do God a disservice by oversimplifying the mystery and complexity of the unknowable, they appear to “keep their light under a bushel.” This offers little to those outside their meetinghouses, as their own numbers continue to decline. Left to a reliance upon personal revelation, they find it more difficult to unite on matters of theology, and labor faithfully to discern the right leadings of the Spirit to order their personal and collective lives and social witness. Operating within an increasingly secular and multifaith social reality in some parts of the world, Liberal Quaker theology has been stripped back—largely over the course of the last century—to a minimalist underpinning of the progressive revelation of God’s truth as experienced by Friends. This may look to others like a “pick-and-mix” spiritual life lacking in discipleship and commitment, but that is not how it is experienced by those for whom it is culturally accessible, relevant, and true.

For those for whom revelation is so progressive (all truth hasn’t yet been revealed), the certainty on which the Evangelical Quaker stands is uncomfortable and resisted. The joy which Evangelical Friends encounter in their experience of Christ is not shared in the same direct way by Liberal Friends; it is not part of their truth, and so takes away from them any basis for evangelism. Since the late twentieth century, Liberal Friends have engaged in limited and localized “outreach” activities, but they lack the coherence and confidence of an evangelical faith. By contrast, Evangelical Friends have a firm foundation for theological study, induction into church life, and social and evangelical witness as discipleship. Neither the Liberal nor the Evangelical Quaker road is an easy one, but each Friend is led by the lights of their own truth to be faithful.

In general, Quakers are not short on integrity and compassion for others. Theirs is a long history of commitment to truth, peace, and social justice. Yet they also share a history of intolerance of their own internal deviations from perceived gospel order and right living. Whenever Quakers have made common cause with other Christians over matters of social justice, they have accommodated their diversity of faith and practice for the sake of the cause; yet such difference within the family has often led to deep schisms and hurtful acrimony.

It may be fanciful and romantic to suggest that such divisions have led to a healthy diversity: a world church that seeks to allow multiple expressions of a living faith that reflect all shapes, textures, and colors of God’s created universe. It requires handfuls of humility and courage to embrace and respect beliefs and practices different from our own experienced truth. We are indeed a church of peace and must surely endeavor to take away the occasion of all conflict and the distress which that causes, especially amongst ourselves. It is not that we should ask one another to sell out or deny our true faith for the sake of a quiet life, nor should we attempt to fake unity. Yet we may learn to let go of those things which hinder our love for one another as members of the family, even when we believe the other to be standing on the wrong ground. Among a people of conscience, there will always be issues on which we cannot unite, and we may not be led so to do. Yet, by recognizing that we are all striving to do the best we can in the place where we stand, we can hold each other’s hand in the Spirit, supporting one another as children of God, to allow each to achieve such greatness to the measure, and in the context, that God has given us. Without love, we are but clanging cymbals. 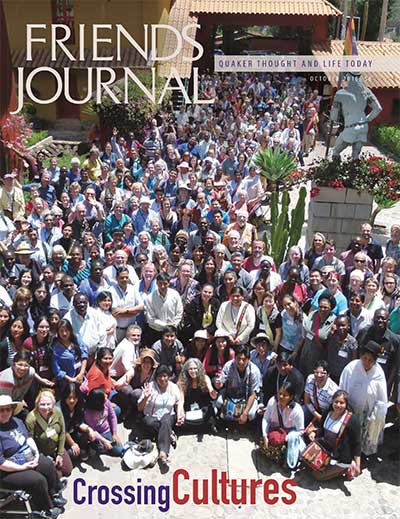 Now retired from her professional life in human resources, Elaine Green focuses on Quaker responsibilities. A member of Bury Saint Edmunds Local Meeting, she is currently studying for a postgraduate certificate in Quaker studies through Woodbrooke College (accredited by Lancaster University). News of Friends, including a Quaker art exhibit in Montana and the FWCC World Plenary in Peru. Staff