The Road We Walked Germantown Friends and other visitors joined Green Street Friends in the summer of 2016 to unlearn racism and oppose bigotry. Photo from Green Street Meeting’s website.

Many faith communities are talking about reparations right now. Most faith communities have done horrible things in the past; Quakers in the Western Hemisphere are not an exception. We have amends to make to multiple groups of people. We are definitely responsible for our part of land theft that happened to the Indigenous Peoples of North America. But I’m going to write about the other great evil Quakers participated in: the enslavement of Africans. And I’m going to tell the story of one faith community’s first steps toward reparations.

The first Quakers spoke about “that of God in everyone,” but I don’t think they really believed that. We know that Quakers enslaved African people for over 100 years in the North American British colonies. As they sought freedom for themselves, they denied it to others. Quakers had a “back bench” in meetinghouses reserved for Friends of Color and denied Black students entry to our schools until the 1960s. Most Quaker meetings are still super White. Green Street Monthly Meeting (GSMM) in the Germantown neighborhood of Philadelphia is healthier than many: we have a number of families, old and young people, and Friends of Color in our membership. Our meeting is growing and not just getting older. This allows us to have authentic conversations. We started having Diversity, Equity, Belonging, and Inclusion (DEBI) workshops and conversations more than 16 years ago. This was not easy, but we as a group wanted to grow, understand, discern, and evolve together.

The story of GSMM’s reparation work began in 2015. The building dates from 1876 and was greatly in need of repair. The meetinghouse leaked, the kitchen flooded, and we had lead paint. The carpets were catching people’s ankles, and the heat worked when it wanted to. We had a contractor come and look at everything that needed repair. We were given a bill of close to a million dollars. Many of the members were dismayed. We didn’t know what to do. Should we have a bake sale? Start selling our old books? How would we fix the building? Where would the money come from?

A member of the meeting’s trustees said we could just pay for the repairs. You mean we have money? That was the day many of us realized that GSMM was a wealthy meeting. The next thought many members had was: What are we doing with our money? Friends were curious about our investments and our good works. We felt that if we had money, we should be using our money in a positive way in our community. We embarked on a six-month journey together called “The Spirituality of Money.” GSMM member Lola Georg led us through six workshops about money (she wrote an article about this in the October 2018 Friends Journal, “Money as a Mutual Blessing”).

Most of the membership showed up on the weekends and participated in the workshops. At the end of that time, around 2018, Lucy Duncan, another member of GSMM, sought out members to start a Reparations Committee (RepComm), and I was asked to participate along with four other members. We were a subgroup under the care of our Worship and Ministry Committee. We started to come up with ideas for things to do in our community with some of our funds.

The ideas were varied and ambitious. We wanted to train the neighborhood youth in trades so that they could join unions. We wanted to buy abandoned property, fix it up, and sell it at cost to our low-income neighbors. The meeting said no to these and every idea that we presented. When COVID hit, the meeting shut down. Our committee lay dormant until the murder of George Floyd, which brought renewed energy around racial justice and reparations. RepComm got new members, and we started again. We came up with more ideas and presented them to the meeting. We were again turned down each time, but we learned a lot, particularly that we wanted to focus on our neighborhood.

Every Quaker meeting is in an area where change is needed, but the KIND OF change is not always the same. Research your history and actually speak with and listen to the people in your community.

Several Friends on RepComm wanted to try a different approach and led the meeting in a workshop on reparations during meeting for business. Together we looked at our entire budget, endowment, and property, and asked the meeting to set aside a percentage of everything we have for reparations. Here is the proposal:

The Reparations Committee recommends that $50,000 annually be drawn over 10 years (2021–2030) from reserves held by trustees and paid as wealth redistribution to Black people in the United States, as a step toward reparations.

During or before 2030, the Reparations Committee recommends this practice be assessed to discern if further wealth redistribution is rightly ordered.

Green Street Meeting approved of the plan, including the proposal that Black members and attenders of GSMM oversee the money. We asked for the money first; we would come forward with the good deeds later. We also asked to not have to report to the meeting, but to share with it what we were doing. GSMM approved a minute and agreed to allocate $50,000 per year for ten years for reparations work. Now the work of RepComm truly began.

The first thing we did was hold a meeting with all the Black members and attenders of GSMM. Over Zoom I asked each person to share what they would like for us to do with the money. We went around the group and heard concerns about public schools, the school-to-prison pipeline, the needs of those returning to society; mental health; food insecurity; gun violence and trauma. These are all issues that plague our community.

I work in housing. I have been a housing advocate, case manager, and community organizer for the past ten years. I proposed to the group that we work on housing—tangled titles, deeds, and wills. Everyone in the group knew someone who had lost their home because of one of these issues. With the support of the Black members of GSMM, RepComm held a planning retreat in the summer of 2021, and in January 2022, GSMM launched legal clinics on Martin Luther King Jr. weekend. The clinics ran every third Saturday until Juneteenth weekend. We had lawyers from Philadelphia VIP (an organization of volunteer attorneys providing pro bono legal representation) and Community Legal Services (which provides free legal advice and representation to low-income residents) help community members on the spot. We had greeters and refreshments.

We put flyers all over town and spread the word through G-Town Radio in Germantown, the Philadelphia Inquirer, local news website Billy Penn, radio station WURD, and area libraries, coffee shops, and farmers’ markets. We even made a banner. In its first year we served 85 families. People in the community were very happy with the help that we offered. We held interviews over the phone and in person. GSMM changed people’s lives in a positive way. We used our resources to take a small chunk out of the economic oppression in our community.

On Juneteenth weekend, we hosted a barbecue, serving fried fish, BBQ chicken, pasta salad, and banana pudding, along with other traditional cookout items. We invited everyone in the community, including all we had counseled and anyone who was hungry, to stop by and get some food. We set up in the yard in front of the meetinghouse. We had music, and the children played in the playground; it was a beautiful day. I felt blessed and proud to be a part of my meeting. We had become a positive and visible part of our community.

Every Quaker meeting is in an area where change is needed, but the kind of change is not always the same. Research your history and actually speak with and listen to the people in your community. I am so happy with what we’ve accomplished in 2022. We don’t know what is next. We trust that way will open and that Spirit will lead us on our journey. Gabbreell James is a member of Green Street Meeting in Philadelphia, Pa., and of its Reparations Committee. She has been an active participant in the racial equity and reparations work at the meeting for years. Gabbreell is a former clerk of Philadelphia Yearly Meeting’s Undoing Racism Group. She is an African American, and her family has been in the United States for many generations.

Quakers and Reparations for Slavery and Jim Crow

Out of the silence a woman asked, “Why don’t Friends take reparations more seriously? It’s the kind of issue Quakers… 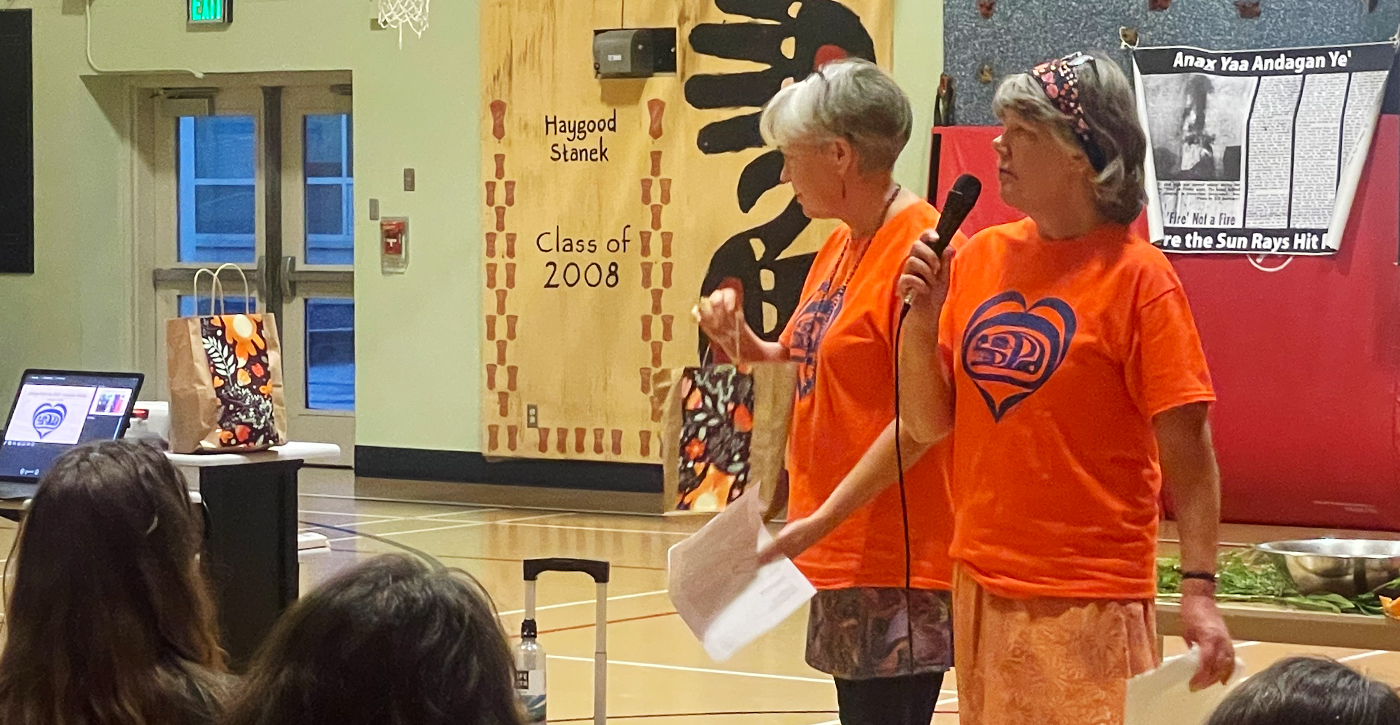 On September 30, 2022—during an event for Orange Shirt Day, a day of remembrance for the harms caused by the… FJ News Editors

1 thought on “The Road We Walked”