Whose Image Is on the Coin? A Jewish Perspective on Abrahamic Wisdoms

I begin with a renewed version of the blessing traditionally offered before learning Torah—sharing wisdom—together:

Blessed are you the breath of life, the inter-breathing Spirit of the universe, who breathes into us the wisdom to know that we become holy by breathing together, by shaping our breath into words, and by shaping our words so that they aim towards wisdom.
Baruch atah Yahh elohenu ruach ha’olam asher kidshanu b’mitzvot, vitzivanu la’asok b’divrei
Torah.

With gathering director Therese Miller’s permission, I played hooky from the Gathering yesterday. I had gotten a phone call from Washington on Wednesday asking if I would take part in a vigil at the Israeli Embassy in Washington. And after groaning and gulping and asking Therese if she felt okay about my being released from my obligation to be here, I went. There were about 50 of us dressed in black, mourning, grieving. We were mourning the deaths of Israelis and the deaths of many, many more Palestinians. And I spoke there with a story I want to share with you.

It’s the story of Joshua crossing over the Jordan into the land of Canaan with the mission blazing within him that it was God’s will to make this into the Land of Israel. And he’s suddenly confronted by a strange and mysterious figure, a messenger from God—an angel—and Joshua shouts, “Are you for us? Or are you for our enemies?”

I’ve known this story a long time, but it came to mind because this week I read an article written by an Israeli nationalist who, quoting Joshua, asked that question twice in his article defending the Israeli invasion of Gaza: “Are you for us or our enemies?” He thought the obvious answer for his readers was, “For you, of course!”

But he left out—or forgot, or ignored—the angel’s answer. The angel answered, “No!”

Not “Yes, I am for you and for your enemies”—because that would still be an endorsement of hostility. “Are you for us or for our enemies?” “No.” God’s answer.

And that’s where we were when we gathered at the Embassy. If there had been an office of Hamas in Washington, we would have gone there too. We were not there to support this government or that government, this army or that army, but out of compassion for the dead and traumatized on both sides of the border and for their suffering.

If we look beyond that urgent question of the Gaza-Israel war, there’s another tale from Torah we can learn from. In fact, it’s in the portion we read just last week, from the end of the book of Genesis, where Jacob brings together two of his grandsons—Ephraim and Menasheh—criss-crossing his hands so the older gets the younger’s blessing and the younger gets the older one’s blessing. But they get the blessing at the same time, and it’s the same blessing for them both: “Forever and ever may the children of our people be blessed to be like Ephraim and Menasheh.” And still, 3,000 years later, that’s how we bless our children.

What happened at that moment? Here was the culmination, the final case, of the brothers’ struggles that run all through Genesis; but this one was very different. In each of the others, the warring brothers are ultimately reconciled: Isaac and Ishmael, Jacob and Esau, Joseph and his brothers. But it takes decades in every case. Decades of alienation, conflict, anger, fear, before they are reconciled.

But Jacob, who has himself been through this process, dissolves it all between his two grandchildren in a single moment, by bringing them together himself. He doesn’t leave it to the two of them. He himself intervenes—bringing his authority—moral and, you might say, political. He has more power than they, and he has the moral authority to do it.

I share this with you because these two peoples, Israelis and Palestinians, have suffered so much from others and from each other in history and they are so filled by fear and rage that it is almost impossible for them to reconcile. If the two of them must straighten it out alone, there may have to be perhaps decades of more war, more death, more suffering.

There is only one power in the world today that has both the political strength and now, perhaps (after the Presidential inauguration), the moral authority to bring those peoples and all the warring families of that family of Abraham together to make peace. That power is perhaps the United States of America in the Obama administration.

But it will not happen automatically, and it seems to me there is only one source of the energy in U.S. society capable of making it happen—because without the application of a strong public will, the U.S. government’s habit of letting it be will just go on. Who has such passion for the region, such deep memories of it, such a sense of sacred space there and such deep emotional connections to the people who live there? The only force capable of making that change—the only people who care enough about that stretch of Earth and who could, if they work together, have the political clout to make a difference—are the Christians, the Muslims, and the Jews of the United States. (Of course, there is one other section of U.S. society that cares passionately about that region, and that’s Big Oil.)

Now among Jews, among Christians, and among Muslims it is not so simple—let alone between them. In each group there are those who essentially support the ongoing war, and the question is whether we, who stand with one leg outside the carnage but with our hearts and minds in part within it—can we, the tiny percentage that is represented here in this very room, the tiny crystal of our Jewish, Muslim, and Christian communities—can we come together to make that change? Because no President can make that change on his (or one day her) own.

There still remains for me to say what I originally promised I would say—and that comes from three bits of teaching from our three traditions. One of them is one you all know extremely well, I hope: the story of Jesus confronted, according to the three Gospels, by some trouble-making Pharisees.

I need to put an asterisk here. The Gospels treat the Pharisees generally as hostile. Modern scholarship and people in the Jewish community who are open to understanding the Gospels—for 2,000 years we didn’t want to, given that they were often jammed down our throats—would say that it wasn’t Jesus versus the Pharisees. Jesus was a Pharisee—a radical Pharisee who had to deal with conservative Pharisees. Jesus versus “the Pharisees” is like saying Dan Berrigan versus “the Priests”! I just want to say this: it’s a problem with the story.

Having said that: these two troublemakers come up to Jesus and ask him a question: “Should we pay taxes with this coin?” So, Jesus, in a totally Jewish fashion, answers the question with a question. (As the old joke goes: “Somebody asks a Jew, ‘Why do Jews always answer a question with another question?’ To which the Jew replies, “Why not?'”)

So Jesus asks, “Whose image is on the coin?” “Caesar’s, dummy, that’s the point.” So Jesus says, “Give to Caesar what is Caesar’s and to God what is God’s,”—and you’ve been arguing about what that means for 2,000 years.

I want to contribute something to your and our reading of the story. Because what you didn’t know for 2,000 years is that in the Talmud—that extraordinary collection of Rabbinic wisdom over five centuries and a few thousand miles of separation—there is an ongoing discussion on the Torah passage in Genesis that says, “God created humankind in God’s own Image.” B’tselem elohim.

Now take that teaching into Jesus’ encounter, and know that he was not only a radical Pharisee but a radical rabbi. He knew that wisdom, and there is a missing line in that story. Either he didn’t need to say it because he knew perfectly well that his brother Pharisees knew it perfectly well, or he did say it but it was censored out because it was so radical:

And then—but not till then—Jesus said, “So give to Caesar what is Caesar’s, and give to God what is God’s.”

And what about the third great Abrahamic tradition in our midst—the one our government has so cavalierly used our own blood and treasure to attack, the one so many in both the Jewish and Christian communities have been so delighted to disdain?

The Quran does not use this image of the Image. But what the Quran does say is a kind of profound collective turning of that story, because it too celebrates the diversity that flows from God’s Infinity. God, speaking through the Prophet Mohammed, peace be upon him, says to all the world: “I have made humanity through many diverse tribes and peoples throughout the world, not so that they can despise and hate one another, but so they can get to know, to learn, and to love each other.”

The greatest organ of our hearing, my beloved Rabbi Phyllis Berman teaches, is not the ear; it is the heart. The time has come at last for us all to hear these teachings from all our troubled families, time at last to open not only our ears but the ears of our hearts to each other.
——————-
Copyright © 2009 by Arthur Waskow.

Rabbi Arthur Waskow is the director of The Shalom Center, http://www.shalomctr.org, a national Jewish Peace and Justice advocacy group with offices in Philadelphia. This article is extracted from his remarks to the Peace Gathering on January 16. 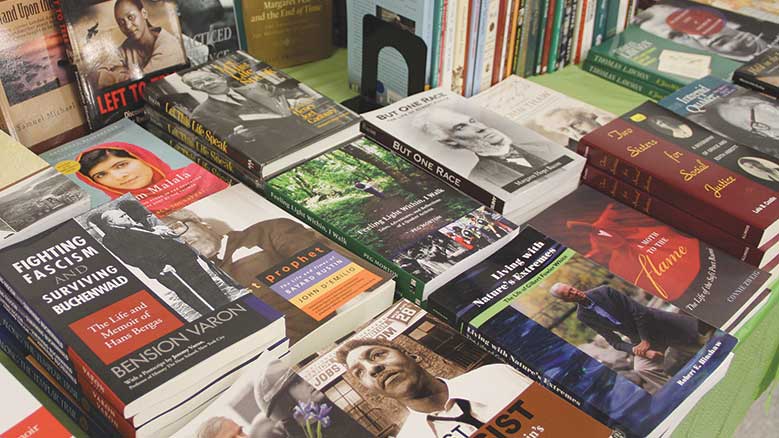