When my life was overturned by unexpected mystical and spiritual experiences, I began a search for understanding. I asked friends about their spiritual experiences and dreams, and searched in books both old and new. In the Bible I found many accounts of direct experiences of God or God’s messages, and I read about the mystics and saints. When I became a Quaker, I was directed to read the journals of George Fox and John Woolman. All this reading was wonderfully helpful, but after a while it began to disturb me that most of the accounts were about men. Several women in the Bible, such as Hannah, become the mothers of prophets, but only a few scattered names of women prophets are mentioned, with little detail. The accounts of women mystics I found were mostly about Catholic nuns living in convents or monastic communities.

Were there women whose call required them to travel and to speak and teach publicly? Among the Quakers, I learned of Margaret Fell in the 17th century and Lucretia Mott in the 19th. Margaret Fell was the most prominent female among the early Quakers. She nurtured and organized the fledging Quaker community and wrote more tracts than any other Quaker woman of her time. She deserves to be called the mother of Quakerism. However, there were hundreds of other seventeenth century Quaker women who preached publicly, traveled in the ministry, or wrote tracts about their faith. The stories of some of the most remarkable of these women ministers are easily found in some books of Quaker history. These include Elizabeth Hooton, the first Quaker minister after George Fox; Mary Fisher, who traveled not only to hostile New England but also to speak to the Sultan of Turkey; and Mary Penington, who wrote a remarkable spiritual autobiography. The stories of other courageous prophetic seventeenth-century Quaker women are barely known at all.

The esteemed Quaker scholars Arthur Roberts and Hugh Barbour put together a wonderful six-hundred-page collection of the writings of seventeenth- century Friends, entitled Early Quaker Writings. Sadly, of those six hundred pages, only three contain the writing of women. In an article called "Quaker Prophetesses and Mothers in Israel," published in Seeking the Light: Essays in Quaker History, Hugh Barbour writes that of the 3853 tracts published by Friends before 1700, 220 of them were written by women. That number is remarkable considering that most women were illiterate in that age and women authors were exceedingly rare. Quaker women’s works of that era have been less frequently published and preserved. A group of women scholars and professors at Earlham School of Religion felt led to recover the voices of seventeenth-century Quaker women for our day. Mary Garman, Judith Applegate, Margaret Benefiel, and Dortha Meredith edited five hundred pages of such texts, which were published by Pendle Hill in a book called Hidden in Plain Sight. When these women from ESR traveled to read documents held in libraries in London, they found that many of the texts were beginning to crumble to dust. They raised funds to microfilm and preserve them.

For me it was a struggle to learn how to read and understand the language of seventeenth century Friends. Eventually, I began to appreciate the context of their times and what they were saying. From early Quaker women’s tracts, letters, journals, and spiritual autobiographies, I learned the stories of women such as Esther Biddle, Rebeckah Travers, Elizabeth Bathurst, Barbara Blaugdone, Sarah Blackborow, Dorothy White, and Joan Vokins, women who traveled, preached, wrote documents, shared the Quaker message, and got carted off to jail. Esther Biddle gave birth to one of her sons in prison. She later traveled to speak to both Queen Mary of England and King Louis XIV of France, asking them to make peace between their warring nations.

Rebeckah Travers had been a staunch Baptist until she became convinced by the Quaker message after hearing the rural Quaker James Nayler debate several of London’s most learned Baptists. Later she went to St. John Evangelist Baptist church and asked a challenging question of the minister. She was thrown outdoors and beaten. Travers spoke publicly on many occasions and became known as a powerful preacher. She wrote at least nine tracts explaining and defending Quaker beliefs and practice. Five times she was put in prison. In a tract entitled For Those Who Meet to Worship at the Steeplehouse, Called John Evangelist in London, she described both the deep spiritual love that moved her and the fearful risk of the prophetic task, which required her and fellow Quakers to face beatings, imprisonment, loss of property, and possible death: "I, who know how precious your souls are, with thousands more, have been made willing…to go forth with our lives in our hands, denying all that has been dear to us, that you might be brought from under the power of the Prince of darkness." She announced to her former Baptist congregation: "[I] am a witness of the new covenant… knowing the pouring forth of the spirit upon sons and upon daughters."

Like Margaret Fell’s home, Swarthmoor Hall in the north of England, the home of Rebeckah Travers in London became a place where traveling Quaker ministers could find lodging and respite after difficult labor in the ministry, or imprisonment. Here London Quakers also met to conduct important business. Like Fell, Travers risked imprisonment and loss of property in opening her home to meetings of Quaker committees. According to Phyllis Mack in Visionary Women, Travers was the only woman regularly to attend the Six Weeks Meeting of Ministers in London. Later, an even more exclusive group began to meet to review and either approve or disapprove for publication the manuscripts being written by Friends. Though this meeting was also held in Travers’ home, no woman was included in the group. Travers helped to organize meetings of women Friends in London.

Quaker traveling ministry in the eighteenth century was not as confrontational— or as frequently illegal—as it was in the beginning of the Quaker movement. Daughters of the Light: Quaker Women Preaching and Prophesying in the Colonies and Abroad, 1700-1775, by Rebecca Larson, gives an excellent academic overview of the extensive travels in the ministry of eighteenth-century Quaker women. I found this book to be helpfully supplemented by reading the journals of three such women, collected and edited by Margaret Hope Bacon in Wilt Thou Go on My Errand?

Another of Bacon’s books, Mothers of Feminism: The Story of Quaker Women in America, provides a wonderful overview of the ministry of Quaker women over three and a half centuries. The ministry of Quakers, men and women alike, has from the beginning always had social and political implications, even when addressing the most explicitly spiritual matters.

In the nineteenth century, Quaker women ministers such as Lucretia Mott, Susan B. Anthony, Prudence Crandall, and Angelina and Sarah Grimke very directly addressed social issues, particularly the abolition of slavery and the rights of women and blacks. Bacon’s biography of Lucretia Mott, Valiant Friend, is the story of an amazing soul who, with the support of her husband, James, was a tireless leader in nineteenth- century movements for social reform. In 1840, she was selected as a delegate to the World Anti-Slavery Convention in London, but the convention refused to allow any women to be seated with the male delegates. Mott became friends with Elizabeth Cady Stanton, whose husband was a delegate. Between them a resolution was formed to hold a convention on women’s rights. In 1848, a group of Quaker women gathered in Seneca Falls, New York. They already had experience conducting public gatherings because of their leadership and participation in Quaker women’s business meetings, and they felt inspired to create a women’s rights convention. In addition to a number of resolutions, the convention adopted the "Declaration of Sentiments," which drew attention to a crucial point that had been missing from the U.S. Declaration of Independence. It asserted, "We hold these truths to be self-evident, that all men and women are created equal."

I have received much inspiration and encouragement from the stories of earlier Quaker women who were willing to take the risk involved in proclaiming the Truth given to them. In many ways I have received the benefits of their labors of love and truth. I hope, like them, to be able to bring this world closer to the Kin-dom of Heaven by a similar faithfulness to God’s call to ministry.

Marcelle Martin is a member of Chestnut Hill Meeting in Philadelphia, Pa. She leads retreats and workshops related to spiritual life and is completing a book telling the story of the communal shift of consciousness made by early Friends. 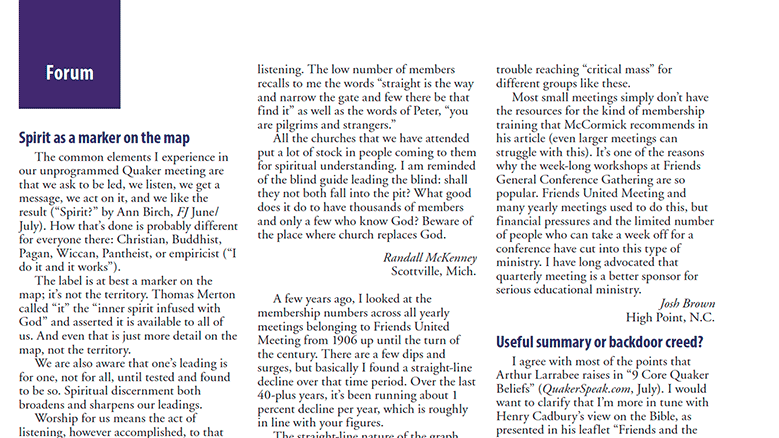