When was the last time you talked to God about a library . . . especially about the library in your meetinghouse? There may be many things we speak to God about regarding our meetings and our meetinghouses, but how often do we take our concerns regarding our libraries to God? It’s been my experience that God responds to our concerns about such things just as God does about most things: in God’s time; with some effort and interest put forward on our part; and often, with a surprising result.

Some Friends meetinghouses have libraries that fill just one bookshelf, with books donated for adults and children, borrowed and returned as needed, perhaps with a sign-out sheet. Other Friends meetinghouse libraries are set aside as a room full of shelves with books cataloged by author and subject in computer files and sign-out processes with dates due. In any case, particular people in each meeting cherish their libraries, use them, and need them. I have always been one of those particular people.

First as a school teacher and then as a pastoral minister, I have always found books to have significance for me. They hold great treasure. Whether they provide spiritual insight, pleasurable release, or foundational teaching, books bring richness to my life and way of knowing, to my understanding of God and myself. Not only individuals but an entire meeting—young and old—is made richer by the collection of books it holds and shares. And books, pamphlets, and flyers have had a place among Friends since the Society’s beginning.

Early Friends, Publishers of Truth, knew the power of words and their significance. It was not only important to live and speak Truth but to print and publish it. The power of the written word meant that many more people, in far distant places, could have access to the intention and direction of leadings. Early Friends ministers carried tracts with them as they traveled, sharing what it meant to be Quaker. Friends testimony was explained. Texts could be read and reread. Hearsay could be limited. Historical documents could be maintained with accuracy. The integrity of the Religious Society of Friends could be upheld more carefully by publishing Truth.

The library began to come to life. But then we faced a new struggle: how would we sustain this?

When I began my ministry in a small Iowa meeting in West Branch, I found their library—a collection of four tall bookcases—on the opposite side of one of my office walls. Once carefully tended, it was now under the care of one retired librarian with great heart but little energy. It was a lovely collection but now underused and underappreciated. What to do? First, I had a conversation with God. Did this ministry in reading and writing matter to anyone other than me and this dear volunteer? Were the stories, history, and study materials held between book covers still meaningful to folk in our meeting?

The two of us began by asking questions. Acting with the meeting, we found newcomers who were interested in reading, books, libraries, and in finding a way in—a way of belonging to the meeting in a significant and helpful way. A revitalized Library Committee was formed. With this small group, reviewing the library holdings began: purging books that were no longer current, assessing subject areas that needed more titles, etc. Book reviews began appearing in the monthly newsletter. Children’s books about Quakers or Quaker themes appeared alongside quiet toys and games on the children’s meetingroom bookshelf. The library began to come to life. But then we faced a new struggle: how would we sustain this? Our main need was the financial concern of supplying new books and replacing old ones. Thus began the West Branch Friends Library Tea.

With the rising popularity of tea and the number of bibliophiles in the world, we thought the connection of a good book and a “spot of tea” would be a great idea. At least it was worth a try! We had space in the meetinghouse, tables and chairs, and lots of ladies with sets of china and teapots in their cupboards at home. The Library Committee, now well formed, divided the work of preparing the teas, sweets, and savories under the leadership of a gifted culinary Friend, and another to set up the space.

People gathered from the entire community once a year on a spring Saturday afternoon for a “spot of tea”—all kinds of teas, in fact, served with sweets and savories on the china sets donated by the women of the meeting. Friends would come for an incredible afternoon of delicious treats, music (“Tea for Two,” “Polly Put the Kettle On”), and great conversation. You can guess what we used for the centerpieces: library books! And a short game was played where each table group had to look up information found in those library books! A small ticket price was charged, eventually with reservations after the event became popular. Entire tables were reserved at one point. The proceeds provided money to furnish books for the West Branch Friends Library. But that’s not the end of the story. During the tea, news was shared about Quaker libraries around the world and the work of Friends in teaching and learning. Half of the proceeds from the teas were sent to other Friends libraries: the Swift Purscell Boys’ Home in Jamaica, Belize Friends School, and Friends Theological College in Kenya are just three of the libraries that received funds. The purchase of tangerine tea one year meant money would go to Room to Read, a nonprofit organization dedicated to providing underprivileged children the lifelong gift of education. The teas continued for five years or more, with a Tea Times cookbook printed, supplying all the recipes for the sweets and savories served, along with the suggested teas to pair with them: blackberry sage, soiree, green tea heaven, cardamom cinnamon herbal, Earl Grey lavender, and rose petal.

Could we have taken an offering each year, and brought in about the same amount of money for the library? Maybe. But it wouldn’t have tasted like lemon tarragon tea cakes . . .

The treasure of a meeting library became a rich reward in friendship, support, expansive growth in ministry and outreach, a great deal of work, and a great deal of fun. The library holdings were strengthened as were the connections between newcomers and older members, and between core people and those on the margins of meeting life. And a new way was found to incorporate the people of our larger community with our own ministries and those of the larger Quaker body around the world.

Could we have taken an offering each year, and brought in about the same amount of money for the library? Maybe. But it wouldn’t have tasted like lemon tarragon tea cakes, smoked salmon tarts, or lavender meringue. It wouldn’t have sounded like a community of friends singing “Polly Put the Kettle On” and then falling apart laughing. And it wouldn’t have been nearly as beautiful as the panoply of patterns of china spread across those tables or all those incredibly different teapots. We were publishers of Truth, sharing the integrity of our lives as Friends, and friends. The conversation with God about our library was well worth the time.

And that’s just one of my meetinghouse library experiences . . . I’ll tell you another one sometime. Until then, here’s a savory recipe from the first annual Library Tea:

In a food processor, coarsely chop olives. Drizzle in canola or olive oil to spreading consistency. Let cure in refrigerator for 24 hours.

Spread tapenade on crostini, and garnish with an olive slice. Ruthie Tippin is a recorded Friends minister. She has served in pastoral ministry in West Branch, Iowa, and most recently at First Friends Meeting in Indianapolis, Ind. Now retired, Ruthie continues to serve Friends in various ways as a retreat speaker, worship leader, and encourager to meetings and their members. 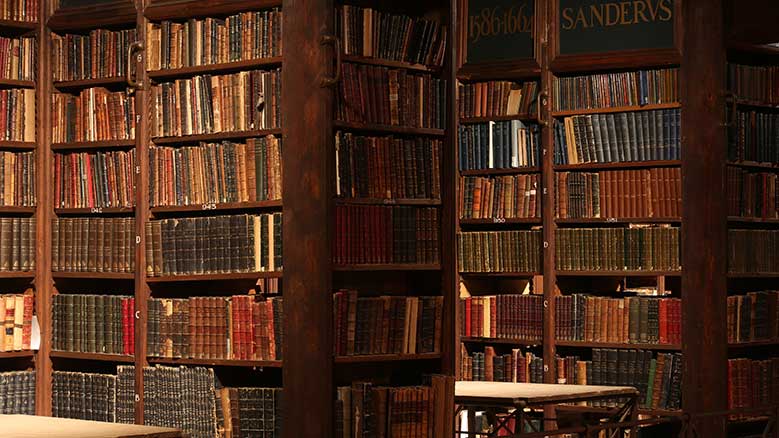 Information is coming to us in different ways than it did in the first 350 years of Quaker history. Carol Kitchen Let God Out of the Meetinghouse

Are Friends too hung up on our Sunday morning rituals? Micah Bales

A Friend shares his process of settling into worship: "As I sit in meeting, I use prayer as a way…