This spring an almost silent recording of a meeting for worship went viral. The recording was created for the digital radio show I host and produce, Young Quaker Podcast, and was conceived as a way to bring the calm and clarity of Quaker silence into the homes and lives of people who might not have experienced it before. When the idea was first pitched to me by fellow young adult Friend Tim Gee, I was intrigued but could never have anticipated the response and interest that followed.

Within a week, the podcast was covered on local, national, and international media across the world. I was interviewed on several UK radio stations; a short film was made by the BBC; articles were published in The Guardian, Church Times, The Metro, and The Friend, and I was invited to write a piece for iNews about being a young Quaker. I knew the podcast really had “gone viral” (something that “spreads rapidly through a population,” according to Urbandictionary.com) when I heard National Public Radio cover the story and more articles from online news sites began pouring in from across the United States and beyond. Downloads climbed from the usual few hundred to nearly 2,000 within days of the coverage, with listeners tuning in from the United States, Belgium, Ireland, the United Kingdom, Canada, Kenya, and beyond to join our small, silent meeting, punctuated with shuffles, creaks, and the methodical ticking of a clock.

At almost 3,000 downloads and counting, the podcast could be considered one of the biggest Quaker meetings ever held. In the aftermath of the media excitement, I began to try and unpick what had made this meeting so successful that Quakers and non-Quakers all over the world had ventured to participate in it. The conclusion I came to was its accessibility.

Meeting for worship isn’t always as accessible as we would like to think. Meetinghouses may declare themselves accessible venues, but accessible for whom exactly? Having a wheelchair ramp is certainly a good start, but how accessible is your meeting to people with severe anxiety, Tourette syndrome, or chronic pain? How accessible is it to single mothers with no childcare options, those who can’t afford the bus fare across town, or people who work night shifts? Does your meeting cater for the turbulent living situations of young people, teenagers who spend their weekends working to save money for college, or those so exhausted and rundown after a 60-hour work week that a Sunday morning is their only time to rest and recover?

The reason that meeting for worship worked so well as a podcast is because it facilitated that quiet worship and contemplation in a way that so many could access. You can download it and listen anytime, anywhere, and with anyone, opening up meeting for worship to entire communities who wouldn’t otherwise be able to attend. Furthermore, its shortened length and the fact you can listen alone make it less intimidating than walking into a room full of hushed strangers for an hour. Its silence seems less alien and more approachable.

The podcast is a good start, but the experience has taught me that if we truly want Quakerism to grow and flourish, we need to take steps toward broadening the accessibility we strive for.

Let’s Talk about It

One of the best ways we can spread the Quaker message of peace and equality is through having conversations about our faith. Friends’ aversion to proselytizing has led to a fear of being open and excited about Quakerism with others, which creates a culture of reticence that prevents genuine connections and outreach. There is a difference between forcing your views on strangers and sharing your thoughts and experiences of spirituality with others in your life. By opening up about our personal faith journeys in all their complexity, we acknowledge the radical pluralism of Quaker spiritual feeling.

As members of a small group, the instinct and pressure to represent Quakerism when talking to non-Quakers can be stifling. One of the things that I love most about meeting and worshiping with other Quakers is that if someone asks you how you are, they really mean it. Platitudes and small talk have no place in caring Quaker communities, and I sometimes wish we could bring the sincerity, humor, and openness of these post-worship conversations into the way we talk about Quakerism with others.

It isn’t just talking about Quakerism that is important but also how we talk about it; using accessible language is another way we can make our Society more approachable. One of my professors at university once told me that the best communicators can explain complicated ideas in simple ways. By couching our spiritual experiences in academic language and intellectual pretensions, we perpetuate the homogeneity of educational backgrounds found in many Quaker communities. Or perhaps I should say, we make our community unwelcoming to those who don’t use such complicated language! Instead, through embracing our simplicity testimony and communicating our faith with plain speech and a more informal tone, we open up Quakerism as something relatable and available to those from many different backgrounds.

When sharing our faith, let our words be ministry guided by experience, feeling, and warmth.

The methods through which we communicate are also important when examining accessibility. Some of the most effective outreach is surprisingly low-tech. By simply having conversations about Quakerism in our day-to-day lives with others, we can leave a positive impression of Quakers without being pushy about our beliefs. Being mindful of George Fox’s famous adage, “be patterns, be examples,” we might consider that you can’t be a good example of a Quaker if no one knows what Quakers are.

The Internet and modern technology provide us with a multitude of ways to open up a dialogue about Quakerism, and we should not be afraid to embrace these new modes of communication. Through a melding of traditional Quaker values and modern communication methods, such as podcasts (online audio shows), memes (humorous pieces of media that are copied and shared rapidly online), or GIFs (repeated video clips), we can communicate the Quaker message in ways that are also accessible and modern. A group unafraid to embrace youth culture and different expressions of faith is a group that will thrive in our dynamic and technologically advancing world.

Embracing younger Quakers and what they have to say is also vitally important for the future of Quakerism and making our Society welcoming and accessible. Young adult Quakers offer a unique perspective within the Religious Society of Friends and can provide valuable insights into how we can become more inclusive both of younger Friends and of others in general. However, a 2016 study carried out by the British group Quaker Life revealed that many young adult Quakers feel belittled, patronized, or devalued because of their age. How can we expect to grow and thrive as a community if we do not look after our next generation of Quaker elders and overseers? How can we claim to be an equal and loving Society when a significant proportion of fellow Friends feel undervalued and unheard? We need to make more of an effort to help our younger Quakers feel respected and appreciated, and that starts with listening to and embracing their perspectives.

Staying True to Our Equality Testimony

Making Quakerism more accessible also includes challenging existing prejudices within the Society, and upholding our testimony of radical equality. This year British Quakerism’s reputation has come under fire when on several occasions meetinghouses were hired by trans-exclusionary radical feminist groups, such as A Woman’s Place UK, for their events. While A Woman’s Place presents itself as a group solely interested in protecting women’s rights and in discussing recently proposed changes to British law that may make it easier for trans people to change their birth certificates, their choice of speakers and the groups they choose to ally themselves with are deeply worrying.

Groups like A Woman’s Place often platform fear-mongering rhetoric and misinformation about trans women, fueling the narrative that the advancement of trans rights will lead to the sexual assault and oppression of women. As Quakers, we should be committed to the equality and safety of every person, including trans individuals, and allowing these objectionable groups to use our venues to spread hate, fear, and false information is not consistent with our Quaker values.

Not only is it ethically problematic to host these events, but it also puts others off from becoming Quakers. A listener of the podcast recently got in touch to say that she was considering attending her first meeting for worship until she saw the Quakers’ track record of hosting this kind of event, and expressed a fear that Friends are perhaps not truly welcoming of all. By allowing organizations like A Woman’s Place into our spaces, we not only go against our principles and damage our reputation, but dissuade the Quaker-curious from reaching out to us, and make ourselves undesirable to those who value the rights of trans individuals.

Another way we can challenge ourselves to make Quakerism more accessible and inclusive is through tackling the unconscious biases and racism we all have, both as individuals and as a society. For those of us who are white, this does not mean feeling horribly guilty, punishing ourselves, and desperately trying to get people of color through the door. Instead, we should examine and challenge our existing assumptions about race, and try to take every opportunity we have of learning from people of color, even if it is uncomfortable at times for us to hear. By addressing our own biases in this way, we take responsibility for the part we play in upholding systemic racism, whether conscious or otherwise. Starting conversations, challenging each other in loving ways, and not being afraid to apologize if we get things wrong are all important parts of becoming a more accessible and aware community, honoring our promise as Quakers to defend equality, peace, friendship, and integrity.

The success of the Young Quaker Podcast’s silent episode shows us that Quakerism can go viral when we make efforts toward making it more accessible. Perhaps instead of looking outward when we contemplate our future as a society, we should actually be looking inward at ourselves and the existing barriers to Quaker faith that are invisible to us unless we personally face them.

We open the doors of Quakerism when we start dialogues about our spiritual experiences. We should not be afraid of different expressions of faith, of upholding our equality testimony, or of welcoming others with open arms. This isn’t about persuading people to become Quaker; it is about staying true to our values and building a Society that is approachable and accessible. It is about sending the message that even if Quaker faith isn’t for everyone, Quakers are. The future is accessible, and we should strive to be a part of that future. Jessica Hubbard-Bailey is the host and executive producer of Young Quaker Podcast and a member of her local meeting in the United Kingdom. 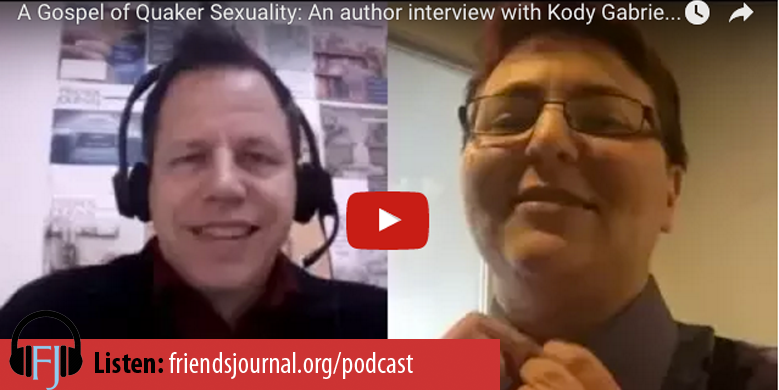 4 thoughts on “The Future Is Accessible”