Holding Unite the Right to the Light

In late July 2018, I started to receive a leading regarding the upcoming Unite the Right 2 rally, scheduled for the second Sunday in August in Washington, D.C.

This rally was organized by Jason Kessler, one of the co-organizers of the 2017 Unite the Right event in Charlottesville, Virginia, which attracted white nationalists, white supremacists, neo-Nazis, and many others to that city. The ensuing conflict resulted in the hospitalization of 30 activists and the murder of another. Jason Kessler wanted to come to D.C. to protest what he sees as abuse of his civil rights and oppression of white people by liberals and the media. The National Park Service had approved his application to hold the rally in Lafayette Square, in front of the White House. Numerous groups of counter-protesters had also applied for permits to be there at the same time to express alternative viewpoints. It looked like the makings of a hornet’s nest and the situation scared the bejesus out of me. And yet, here was this leading, asking that I bring a group of Friends to the middle of the park and hold meeting for worship.

I ran it past a couple of trusted Friends, who for the most part—while not actually asking me if I was out of my mind—indicated that it needed more seasoning. I prayed. I came to feel that Friends needed to be there in worship: both as a place to express our values by living them and to hold the space as a place of peace in the midst of a tense and fraught situation.

I came away thinking this idea was probably nuts, and dangerous besides. How irresponsible was I being? How naïve? And yet, here was this leading . . .

This isn’t a new idea. Friends have often held public meetings for worship, particularly in support of social justice issues. Friends did this during the Vietnam War, sitting on the sidewalk in front of the White House. With Earth Quaker Action Team, I’d entered various PNC Bank offices in Pennsylvania and D.C. to worship in protest of the bank’s support of mountaintop removal. And during the Occupy Wall Street movement, I’d helped to lead a few meetings for worship in their occupation of McPherson Square in downtown Washington. I wondered, was it time to do it again?

I sent an email to my local meeting, Friends Meeting of Washington (D.C.), and to Baltimore Yearly Meeting saying I was feeling led to do this thing. The yearly meeting suggested I hold an interest group at its annual sessions the next weekend to further test the leading. I held a meeting at my monthly meeting on the last Sunday in July.

Friends were supportive at Friends Meeting of Washington, though things quickly devolved into a hilarious discussion about what color t-shirt we should wear to help the police distinguish our group, settling at last on good Quaker gray. We decided to form a working group to think through logistics.

The interest group at annual sessions, however, was discouraging. As one gently put it, “I don’t see asking Quakers to sit in worship in the middle of a group of screaming racists to be a recipe for success.” She had a point. I came away thinking this idea was probably nuts, and dangerous besides. How irresponsible was I being? How naïve? And yet, here was this leading . . .

At that interest group, a member of Charlottesville (Va.) Meeting spoke eloquently about her meeting’s actions on that horrible weekend in August 2017. They’d worked with an interfaith group that was holding services in a public park and had taken their turn by holding a meeting for worship there. She said it helped the meeting to identify and stand up for their values, and served as a connecting point for them to the wider Charlottesville interfaith community.

Praying about this, it came to me very strongly—very strongly, I can’t emphasize this enough, it felt like a direct message—that I was responsible only for catching the leading; I was not in charge of the response.

I kept thinking that Quakers have a gift, a real gift, to give to the world: it’s our style of worship, which is open to all and opening for all. It felt right that we should use this gift in this way. I put out the call to area meetings and continued to pray.

We then discovered that several other communities of faith were planning actions that day, most of them far away from the Unite the Right rally in Lafayette Square. We decided that, in addition to our worship at Lafayette, we would send some folks to the action at Freedom Plaza. At that location, a wonderful expression of diversity and equality was being organized, mainly by communities of color and Jewish groups. Barbara Briggs headed up that effort, and I dug around, trying to find folks who would go with her. I kept hoping that one or two people would accompany her, and if we were really lucky, maybe we could get 10 or even 15 people to come with us to Lafayette Park.

Praying about this, it came to me very strongly—very strongly, I can’t emphasize this enough, it felt like a direct message—that I was responsible only for catching the leading; I was not in charge of the response.

And then, Friends stepped up. They offered lists of what to bring and not to bring. They brought water bottles and granola bars, volunteered to make soup or give peacekeeper trainings, and donated Love Thy Neighbor pins. I started to get calls from people coming from as far as Roanoke, Virginia, and Philadelphia, Pennsylvania.

We soon became this island of calm in the midst of anger. People took pictures and asked questions. Some sidled over and stood nearby; some sat down with us and went into the nourishing silence.

On the day of the rally, I went to meeting with my heart in my throat and spent most of the worship time trying to keep my heart open and clear. Usually having a leading leaves me with a sense of peace and warm energy; this one didn’t. I was scared but still quite, quite certain that this was a leading that needed to be followed. At the rise of meeting, we made one last announcement. A slew of people descended on us, wanting the Love Thy Neighbor pins and directions, all ready to roll. Barbara scooped up 17 people and took off for Freedom Plaza carrying our Quakers for Equality banner. A few of us went to lunch and then came back to chop veggies and make soup.

Just before 3:00 p.m., people started streaming into the meetinghouse, wearing their good Quaker gray and ready to participate. Everyone buddied up and exchanged phone numbers. We kept putting out more chairs and printing more “buddy sheets” for Friends to fill out. By the end, our assembly room was jammed. Even more, people waited for us down at Lafayette Square, where Barbara and her group had moved. J. E. McNeil gave her excellent peacekeeper training, cutting it short when we heard that the Unite the Right participants had decided to show up an hour early.

We took off, holding our Love Thy Neighbor/No Exceptions banner, walking toward the hovering helicopters and noisy crowd. As we approached, a group of black-clad, black-flagged people was marching and shouting obscenities. I assumed they were part of the alt-right. Turns out they were antifa activists, a movement of left wing militant anti-fascist groups in the United States.

The park had been divided, with a sad, small group of 30 to 50 white nationalists huddled in the southeast corner and thousands of counter-protesters occupying the northern half. We wandered in, sat down, and started our worship, as some Friends held our banners. We soon became this island of calm in the midst of anger. People took pictures and asked questions. Some sidled over and stood nearby; some sat down with us and went into the nourishing silence. An African American woman came over to hug us, telling us over and over that we just need more love. Thunder rumbled, and a gentle rain started to fall. Friends prayed. It was so, so beautiful.

Finally, we felt the meeting had come to a close. We shook hands, and sang all the verses to “Amazing Grace.” People around us joined in. It was glorious.

In all, we had more than 80 people there from at least six Friends meetings. We showed up on people’s Facebook pages and Twitter accounts, with one person calling us “the most peaceful protest at the park.” We got tons of likes—a significant number from folks in the alt-right (go figure). In some ways, it felt like the most evangelical thing I’ve ever done.

We floated off, some back to the meeting for soup and a gentle debrief. The folks from Philadelphia and Roanoke had a three-hour drive to get home, so we didn’t stay too long. Everyone pitched in with the clean up. It was still light out when we left. And it was Light within. 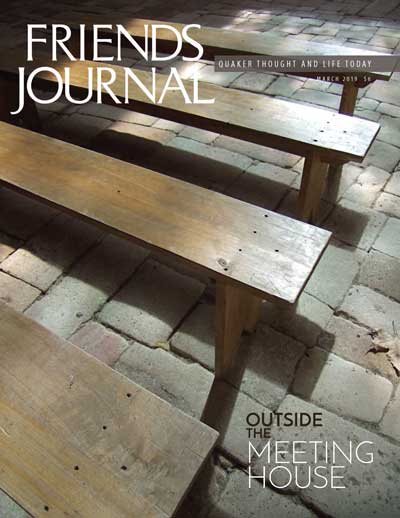 Debby Churchman is a member of Friends Meeting of Washington (D.C.) and served as its administrative secretary at the time of this event.

A Day Off in the Life of an Intern

It’s spring in Washington, D.C. There is a war on. I’m walking down the National Mall, surrounded by people, flags,… A Modest Step Towards Peace and Union

Among reflective people, there is probably little doubt that the traditions and culture we are born into incline most people…

5 thoughts on “Holding Unite the Right to the Light”