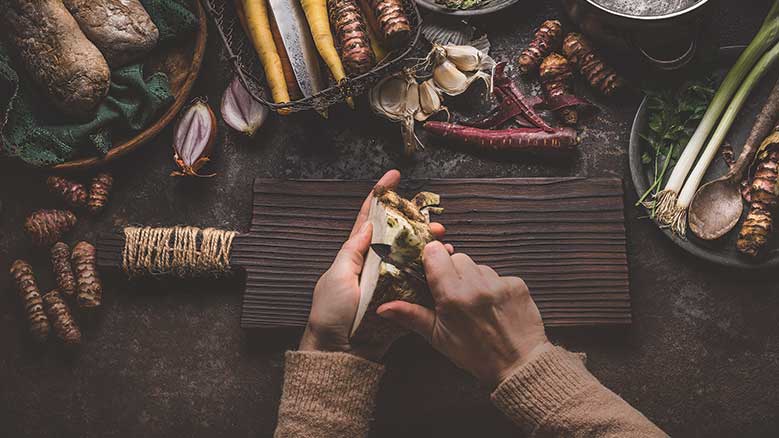 Any faith I have had in the progress of humanity started to crumble over the past few years under the weight of one environmental report after another. As someone who takes great joy in observing insects, I was particularly shocked to hear about the scale of their decline. The predictable consequences of our collective assaults on the ecosystem paired with the growth of the human population had clearly brought us to a tipping point, as studies demonstrated catastrophic reductions in the populations of insects and parallel falls in the numbers of mammals, birds, reptiles, amphibians, and fish. Meanwhile, billions of suffering farm animals have been made unwilling instruments of this disaster. My own thoughts and conversations became dominated by a sense of desperation.

Last December, as the old year wound down, I decided that I needed to get a grip. A Friends school education had left me with a vague sense that New Year’s resolutions might be somehow unquakerly, but this time I made an exception. I resolved to give hope a chance. I know that of faith, hope, and love, the greatest of these is love, but my experience is that hope is a prerequisite. Despair causes paralysis, and in this case, it is an indulgence we cannot afford. Nurturing hope is consistent with my philosophy of life, which is that the secret to happiness is to learn how to be joyful and miserable at the same time! I, therefore, decided that hope is something worth cultivating, and I offer three of the many reasons for us to have it in regard to our food choices.

Reason 1: We are now better cooks.

Meat eating has its origins in prehistory. But vegetarianism also has a long and continuous pedigree, with examples in the West dating as far back as ancient Egypt. In the last couple of centuries, the number of adherents in the United States has remained relatively steady at around 3 percent of the population. Yet in India, vegetarianism found and still enjoys wild success. One of the cultural reasons for that is that Indians are simply better vegetarian cooks!

The good news is that the rest of us are catching up. My husband has stocked our kitchen with over 50 vegan cookbooks that cater to every type of cooking style, from the quick, simple, and economical to elaborate haute cuisine. Easier still for those who don’t enjoy standing at the stove, cooking has become less necessary. Prepared vegan foods are found in many of our supermarkets; meat substitutes have come into their own; dairy‐free ice cream options abound. The HappyCow website and app quickly locates vegetarian and vegan‐friendly restaurants. A clear sign that this trend has reached the mainstream is that vegetarian options are appearing in more and more fast‐food joints.

Avoiding animal products has also become more culturally acceptable. Famous vegans such as Colin Kaepernick have helped popularize the movement and provide reassurance that eating a plant‐based diet does not create 98‐pound weaklings. _The Economist _declared 2019 to be the “Year of the Vegan.” To paraphrase what a National Public Radio host asked on a show last January, “We may sometimes label animal lovers as pesky, but what if they are right? What if the vegans are actually right?”

Reason 2: Humans are recognizing our self‐interest.

Although humans on the whole continue to be as cruel and selfish as ever, we are starting to recognize that our self‐interest is at stake. Whether or not we have regard for the intrinsic value of other species, we cannot deny the importance of “ecosystem services,” which are the functions of the natural environment upon which our lives depend. We need oxygen and food, yet animal agriculture is the leading cause of deforestation in the Amazon rainforest and consumes too much land while contributing mightily to the loss of habitat, use of pesticides, and rising temperatures that are responsible for pollinator decline. We need shelter and security, yet animal agriculture is also a leading causes of the climate change that threatens the homelands of hundreds of millions of humans and contributes to food insecurity and displacement of entire populations. We may not be connecting the dots—in fact, active concealment by those whose interests are threatened may prevent us from doing so—but many people are growing worried enough to be ready for change, even if they do not yet know what is needed.

If 60 percent of the human population were to disappear over 50 years, it would get our attention. In our self‐absorption, we drove out the same proportion of our fellow vertebrates and barely noticed, and we are rapidly working on displacing the rest. Our taste for meat is a major contributor to that displacement. How do we reconcile our words of peace with our participation in daily acts of violence?

Reason 3: Quakers are ready to talk about our food choices.

Little by little, Friends are losing the inhibitions that have made veganism a taboo subject in Quaker circles. As an example from my own experience, a group of Baltimore Yearly Meeting (BYM) Friends convened in 2014 to stimulate thought and discussion about our food choices. Since then, members of the group have hosted vegan tasting feasts, given several workshops, led conversations and worship sharing at approximately 30 monthly meetings, put up displays at annual sessions, created short videos for our webpage on the BYM website, and wrote a Pendle Hill pamphlet: Enlarging Our Circle of Love. At the yearly meeting annual sessions in August 2018, the gathered meeting united around this minute:

In the interest of peace, and with a deep concern for the living world, Baltimore Yearly Meeting of the Religious Society of Friends encourages Friends to discuss how to extend their love and compassion to animals, and to consider their welfare when making food choices.

The road that led to this historic statement has not been without its bumps. Even this mildest of minutes caused some discomfort. Are we being disloyal to our family members who eat meat, and arrogant in implying that we might have learned something that they didn’t? Might talk about the suffering of cows and chickens offend Friends who have made their living raising animals? Might our membership dwindle if we suggest that eating animals and using animal products is a moral issue? Might a recommendation to consider the welfare of animals lead to an obligation to actually do something about it?

In the end, these concerns gave way to our love and trust in each other. We are committed to seeking truth together and helping each other to be the best we can be. We work for peace not by hiding conflict but by exploring its origins.

I believe that Quakers are ripe for discovering the joy of being liberated from the societal programming that perpetuates harmful dietary habits. We don’t mind being iconoclasts or taking the lead in social justice movements. We are sensitive to the connections between the “isms” such as ageism, racism, sexism, homophobia, and species-ism—all ways for us to objectify, belittle, and dominate the “other.” We believe in continuing revelation and are willing to acknowledge that we may have assimilated unrecognized prejudices which may need re‐examination. We have a tradition of speaking out and will not be intimidated when “Big Ag” sues people for merely talking about the risks of eating meat, or when it makes it illegal to film the atrocities occurring daily in factory farms. We embrace opportunities to make a positive difference in our personal lives, and what could be more reinforcing than knowing that with each meal, we are consuming our share—not more—and literally saving the life of at least one of our fellow beings? We have many opportunities to let our lives speak but few that have such a direct and immediate benefit.

When we are confronted with the suffering of others, we wish to relieve that suffering. We abhor useless cruelty. When kinder options are available, is not destroying the life of a struggling animal both cruel and useless?

Significant barriers remain. New habits can be tripped up by the smallest thing. We are human and prone to taking the path of least resistance in spiritual as well as practical matters. It is painful to examine the implications of our treatment of animals. Quite aside from our natural reluctance to read about the details of meat processing and dairy production, it requires significant work to deconstruct the eating traditions of our family of origin. We all know that the only life we have to live is our own, but somehow along the way, most of us came to accept that it is okay to try to appropriate the lives of others to ourselves. On a minor scale, this can take the form of trying to control our children’s choices. On a more massive and sinister scale, it can lead to a sense of entitlement to the very bodies of other beings.

From my discussions with Friends, I believe that our testimonies and values are in harmony with a more expansive interpretation of “the greatest of these is love,” one that extends beyond love for our own kind to include the rest of the living world. Most Friends ascribe to a worldview that love and compassion should have a preeminent role in how we order society. When we are confronted with the suffering of others, we wish to relieve that suffering. We abhor useless cruelty. When kinder options are available, is not destroying the life of a struggling animal both cruel and useless? Will we continue to kill for any reason short of dire necessity? I hope not. Our human ability to compartmentalize enables us to be callous, but our desire to live intentionally prompts us to act on our better nature.

Friends take a dim view of the idea that “might makes right.” We can be seduced, though, by an end that seems to justify the means. Are not some of us persuaded by the concept of a “Good War”? So when weighing human priorities against the value of the ecosystem and of billions of innocent animal lives, I find it helpful to recall that every living being is the “end.” Let us free ourselves from our complicity with violence. Peace is the way.

A member of Herndon (Va.) Meeting, Margaret Fisher is clerk of Baltimore Yearly Meeting’s Working Group on Right Relationship with Animals. She enjoys photographing insects while on wildlife surveys and spends much of her free time working for a native plant campaign in northern Virginia.

Letting the Higher Power Do It
Butcher Hogs for Sale

5 thoughts on “A Vegan Offers Three Reasons for Hope”