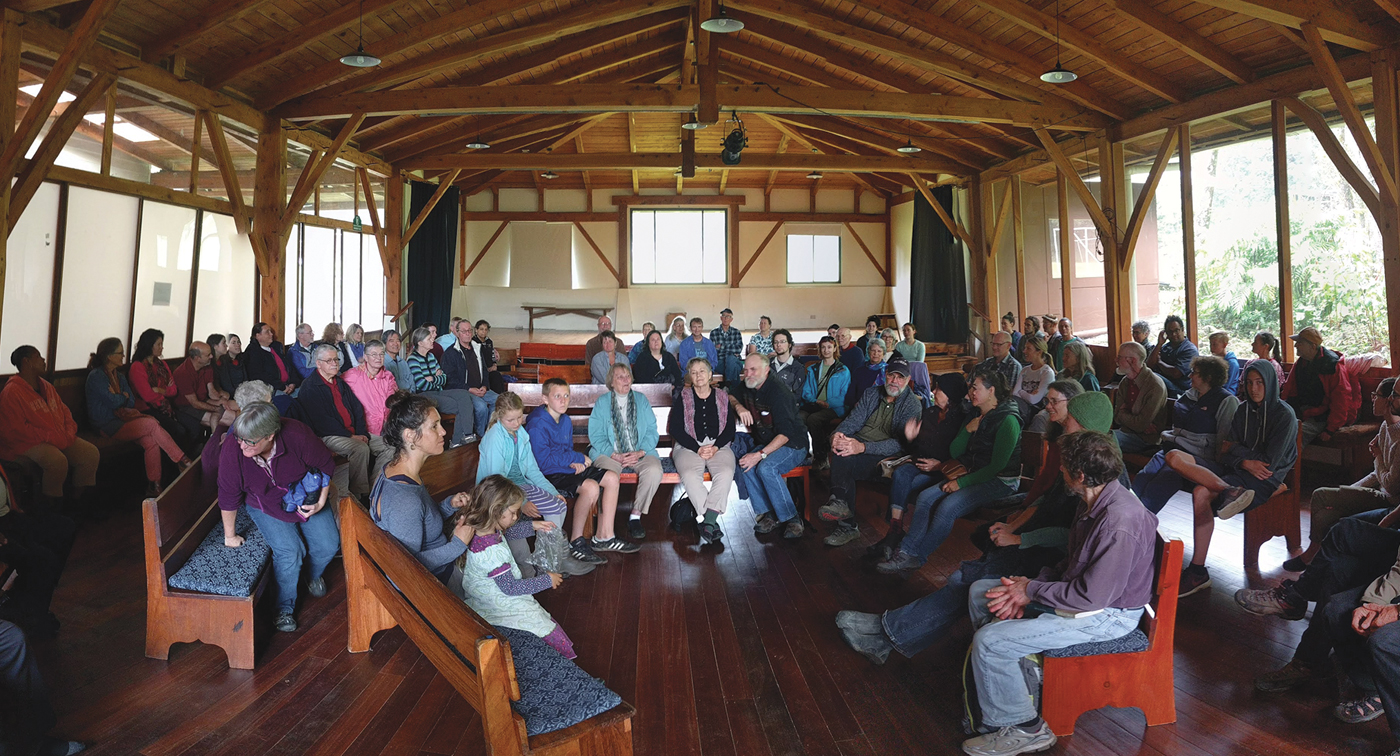 As a small, isolated monthly meeting in a bilingual community, Monteverde Meeting in Costa Rica relies on volunteers to translate all communication. Unlike other Central American Quaker churches and meetings that were founded by missionaries, Monteverde Meeting was founded by U.S. immigrants. The Quakers who came to Costa Rica in 1950 did not come with the intention of evangelizing, but rather they came to simply live and worship in the same way that they had in Alabama and Iowa. Although the settlers made efforts to learn Spanish and cultivate good relations with Costa Rican neighbors, they did not try to convert others to Quakerism, and the meeting activities were naturally conducted in English.

With time, children and grandchildren of the original immigrants grew up bilingual. New English-dominant immigrants have joined the meeting, as well as Spanish-dominant Costa Ricans. Although most members now are fairly fluent in both languages, there are a few with very limited Spanish and also a few with very limited English. The monthly meeting continues to be English-dominant, but basically everything needs to be available in both languages.

Written translation is generally done by the committee or person submitting a report or article. Oral translation is more complicated; there are two forms: simultaneous or consecutive. It is rare to find a person who can do both types well. During meeting for worship, we use consecutive translation or interpretation. The interpreter waits until the person giving the message has finished and then repeats or summarizes the message in the other language. This avoids having to guess which language(s) a visitor understands, or requiring people to sit in a certain area for translation. It’s also an advantage to people who had difficulty hearing the original message as they can then listen to the translation. During monthly meeting for business (as well as for announcements at the close of worship), we do simultaneous translation by having someone sit next to a person and translate quietly.

I am part of the team that does consecutive interpretation in meetings for worship. Thankfully, we have a supportive team. I feel comfortable asking for help if I come to a word I don’t know or if I leave out an important part. The first few times I interpreted, I was so nervous that my mind would freeze up half-way through a message and suddenly I couldn’t think of a single word! I had been trying to memorize the message and translate it word for word. The image that helped me get over this fear was to imagine myself as a stained glass window that lets the light go through me, changing only its color. Instead of trying to retain all the words, I just listen for the essence of the message and let it speak to me. Then I try to give the message in the other language as if it were a message given directly to me. If a message is very long or rambling, it may be retold with less detail.

Interpreting spoken ministry into another language is a discipline that helps me listen more deeply and attentively to messages. There have been times when I have been called upon to interpret a message that doesn’t speak to me, that I don’t understand, or that seems to be totally inappropriate. I find it very difficult to say out loud a message that I disagree with or feel is not appropriate. Yet, is it my place to judge? I try my best to put myself in the place of the person giving the message and look for something worthwhile in the message.

We hope to create better understanding through translating, yet sometimes we inadvertently create misunderstandings. English and Spanish have many words that are similar (cognates), such as meditation and meditación. However, there are also false cognates that can fool us (for example, sopa isn’t “soap,” and ropa isn’t “rope”). In Costa Rica, a religious service is generally referred to as a culto: the word used for a Protestant church service or a Catholic prayer service that doesn’t include a Eucharist. However, for English-speaking Friends, “culto” brings up connotations of a cult. English-speaking Quakers use the word meeting in many different ways, and each requires a different expression in Spanish: meeting for worship (culto), meeting for business (reunión de acuerdos), meetingroom (salón de reuniones), meeting community (comunidad cuáquera), etc. The word mitin in Spanish sounds the same as the English meeting but means “a political caucus,” causing some Costa Ricans to think that we are primarily a political group.

Traditional Catholic Costa Ricans have usually been raised with male images of God, along with a devotion to the Virgin Mary. Quakers, in trying to avoid these anthropomorphic images, will often use the word “Spirit.” This seemed the best to me until one day a person told me that he associates Espíritu with ghosts—oh dear! Sometimes what we think we are saying is not what is heard. I wonder what I might be misunderstanding when I interpret from Spanish to English.

The pandemic brings new challenges to language inclusion. We have been conducting meetings for business by Zoom, which makes it impossible to translate simultaneously into a person’s ear. If we translate consecutively, the meeting lasts twice as long. We have tried typing the translation into the chat box, but it is difficult to translate and type as fast as people talk. The truth is that even though we try to include everyone, the Spanish-dominant members are not able to participate as actively in the monthly meeting for business. Another result of the pandemic is that most of our members are worshiping outdoors in small family groups or alone. We no longer have the benefit of vocal ministry from other meeting attenders. We sometimes read Friends Journal or Pendle Hill pamphlets or watch QuakerSpeak videos for inspiration. These resources are not available to our Spanish-speaking members, further isolating them.

Being a bilingual meeting brings both challenges and richness. As we struggle to understand each other, we delve more deeply into the meaning behind our languages and touch the reality that is ultimately beyond words.

Carolyn Evans has been a member of Monteverde Meeting in Costa Rica since 1990 and currently serves as presiding clerk.

There's a long and beautiful Friends tradition of seeking fellowship 1 thought on “Bilingual Meeting for Worship”