A Consideration of Metaphors

How can we understand better the relationship between Christianity and Quakerism? In this piece, I want to look at some metaphors that we do, or could, use. I want to ask what these metaphors imply about the two traditions we’re looking at, what true and helpful points the metaphors capture, and where they might mislead us.

Before I start, a few words about what I take “Quakerism” and “Christianity” to be. In both cases, I’m talking about a tradition: a set of stories, practices, and characteristic language uses that is passed down from one generation to another. I’m talking about a religion (and the English word “religion” takes Christianity to be the model religion to such an extent that, especially in older uses, “religious” can just mean “Christian”) that has spiritual, cultural, and political elements. I’m not talking about individuals, and I’m generalizing across all the variation within the traditions. (Given my location and personal history though, I probably have a bias toward foregrounding Liberal Quakerism and Anglican Christianity.) I’m aware that some Quakers favor an anti-ism-ism that leads them to oppose racism, feminism, and alcoholism equally, but in my opinion, it’s just a grammatical feature, which is a handy way of distinguishing the tradition: “Quakerism” as distinct from individual “Quakers” or “Friends” or from the spiritual path of “the Quaker Way” (“Christianity,” “Christians,” and “the way of Christ” function similarly).

And what is a metaphor? Roughly, it’s when you take language from one area of life and apply it to another; the combination sets up a juxtaposition or comparison between them. In making metaphors explicit, they often become similes; in making the comparisons involved explicit, they can seem more like analogies. For the purposes of this piece, I’m going to take them all together as figures of speech that work in related ways. One of the things a metaphor often allows us to do is cut corners and use shorthand, not going into every detail every time but giving a general impression that’s often very helpful. Sometimes Metaphor Megan, able to leap from premise to conclusion in a single expression, is just the superhero you need. Sometimes it helps, though, to work through the detail so you’re sure you’re leaping to the right conclusion.

What metaphors could we use to describe the relationship between Christianity and Quakerism? Here are some drawn from conversations with Friends and my own imagination. You might like to read through them slowly and notice your reactions to the different images.

Sometimes these metaphors capture the judgments that Quakers make as we try and work out how to relate to Christianity. The image of “Quakerism as the child” who has mixed feelings about the parent Christianity—embarrassed by it, wanting reassurance from it, rebelling against it, rediscovering that it can actually be wise at times, or even feeling abused by it—captures within the metaphor this range of reactions. On the other hand, sometimes these judgments are embedded within the metaphor: the “stages of life” image does this, with its ranking of more- and less-mature traditions. Metaphors like this are often not spelled out, but can be hidden in language about primitive belief systems: a youthful need for certainty or an individual’s life story assumed to be a universal ideal.

I‘m also intrigued by the way that some of these metaphors position Christianity and Quakerism as two things of the same type (parent and child are both people) or two parts of the same thing (tree, book), while others make them into two very different things (like a car and an engineer). This is especially striking in the “rooted in Christianity” image, where Quakerism is a plant—a living, growing, active thing—while Christianity is the soil. If, as I think many people do, we imagine the soil as relatively static and lifeless, this metaphor is saying something quite strong about Christianity. I think Quakers often do picture Christianity (or at least whatever church they knew in childhood or are leaving behind to join the Quaker community) as something static, not changing or even capable of change. I also know members of other churches who wouldn’t agree with that assessment!

Making the same mistake about Christianity might not seem morally as bad, especially if you feel like a member of a minority group who is “punching up” when you attack socially powerful Christianity. Intellectually though it’s just as bad, and if you are part of a diverse Quaker community in which there are members who identify as not only Quaker but also Christian, Jewish, nontheist, Buddhist, and so on, you’re going to be insulting somebody every which way around. In the process of thinking through and trying to improve metaphors, these patterns are something to be aware of and to seek to avoid or subvert.

A related question is raised by the metaphors we don’t use. When Quakers talk about world religions, there’s often a path/mountain image: all religions are different paths, but they are traveling up the same mountain toward the same Deity (which is an odd thing to say when some of the paths are non-theistic or polytheistic). Sometimes it becomes a map/terrain metaphor: all religious teachings are maps of the same mountain, and while you can climb using just one map of one path, you can also learn a lot by studying other maps. Christian traditions are included in this image, but often very implicitly, while people name other traditions, especially Buddhism, as the ones from which they have learned.

One of the strengths of metaphor generally is that a suitable metaphor can capture not only facts, but also feelings. Someone who uses the car/repair work image for Quakerism and Christianity probably feels more positively about Christianity than someone who compares it to a teenage phase that needs to be outgrown. This is one of the strengths of this way of talking about things—so long as we are aware of it, ready to work with it, and don’t assume that everyone feels the same way! Personally, I feel neutral-to-positive about Christianity as a whole tradition, but there are people in my Quaker community for whom it’s the best thing ever, completely irrelevant, or the cause of more problems than it solves. Sticking to a single metaphor will tend to hide this, or to imply to some of these people that we think they are wrong. Using a wide range, however, has a fascinating potential to help us tell the truth of these many different perspectives.

What if Quakerism is a fish in a new tank? Sometimes it’s hiding in one familiar and safe corner and at other times darting out to explore other cooler, warmer, faster-flowing, or more exciting patches of water—and perhaps not fully aware that this stuff, water or Christianity, is already filling the safe corner as well.

What if traditions are workers in a big, open-plan office? Each with his or her own desk, similar but distinguishable (Quakerism has a peace lily in a rainbow-striped pot, Anglicanism has a big family photograph, and so on), all working in their own spaces and on their own projects but also contributing to the work of the company as a whole: the glory of God.

What would traditions be like if they were people? Can you see Christianity as a person: a quiet woman making instant coffee for rough sleepers, a bully who forces opinions onto others, or a man with dirty feet and big hands who likes to have dinner with sex workers and tax avoiders? Can you see Quakerism as a person: someone who yells at police officers and politicians; someone who dithers in the chocolate aisle, liking them all but not knowing which is best; or someone who quietly makes hot drinks for whoever comes?

Rhiannon Grant works at Woodbrooke Quaker Study Centre in Birmingham, UK, supporting Quaker Roles courses and the Centre for Research in Quaker Studies. She is a member of Bournville Meeting, part of Central England Area Meeting, and Britain Yearly Meeting. Her book on Quaker theology, _Telling the Truth about God_, will be published in March 2019. 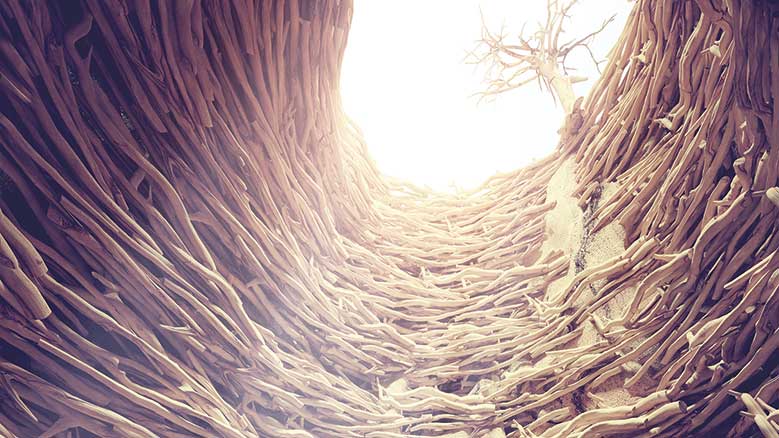 Continuing revelation implies we are continuing from somewhere. Gene Hillman The White Rabbit of Quaker Theology

Quakerism must be experienced, both individually and collectively. Christy Randazzo

1 thought on “A Consideration of Metaphors”